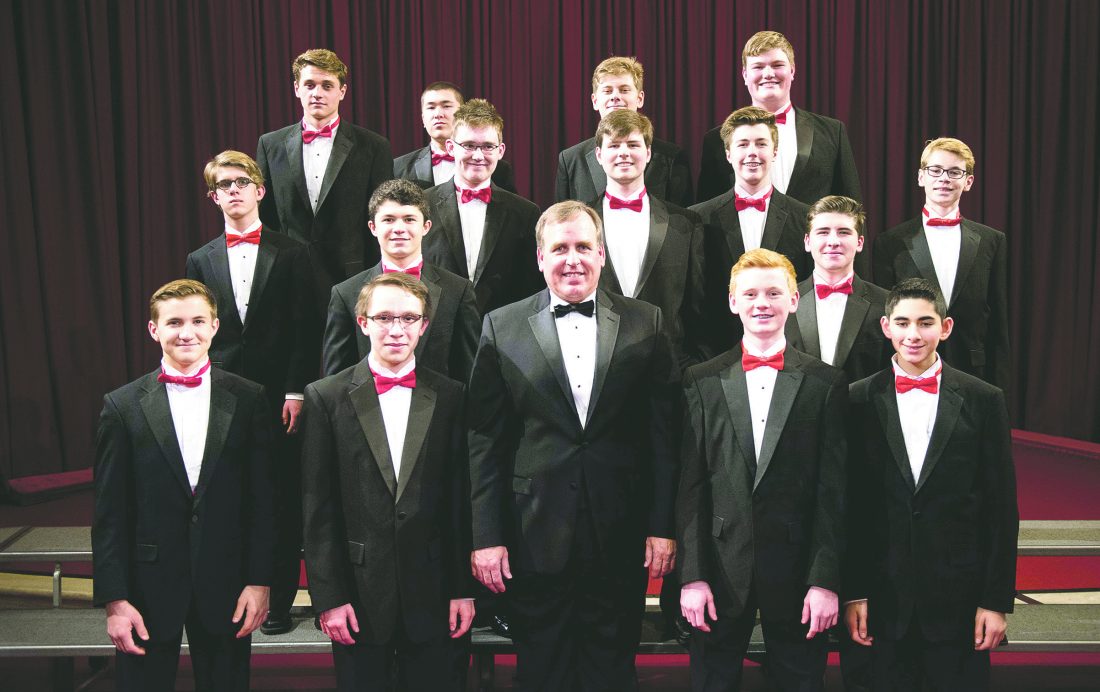 Submitted Photo Sheridan native Donald Cotton is pictured here with the Young Men’s Ensemble from the Children’s Chorus of Washington, the ensemble that he founded and conducts.

SILVER CREEK — While inspiration can take the most unlikely forms, many people can recall one or two special teachers who had a particularly important influence on their lives. Sometimes, many years pass before one realizes the life-changing influence a teacher had. Other times, a student recognizes that influence immediately and seeks to inspire others in the same way.

Perhaps the rarest — and most special — times are those when a student is able to see that teacher years later and thank him or her for the life-changing lessons imparted.

This week, Sheridan native Donald Cotton is returning to the area to do just that, and he is bringing some very special guests along with him.

Currently, Cotton is the associate artistic director of the Children’s Chorus of Washington (D.C.), the premiere youth choral ensemble in the United States. Cotton has been with the organization since its founding in 1996, and served as their principal accompanist during his first 20 years. In addition to serving as associate artistic director, Cotton also conducts their Treble Chorus and Young Men’s Ensemble, which he began seven years ago. 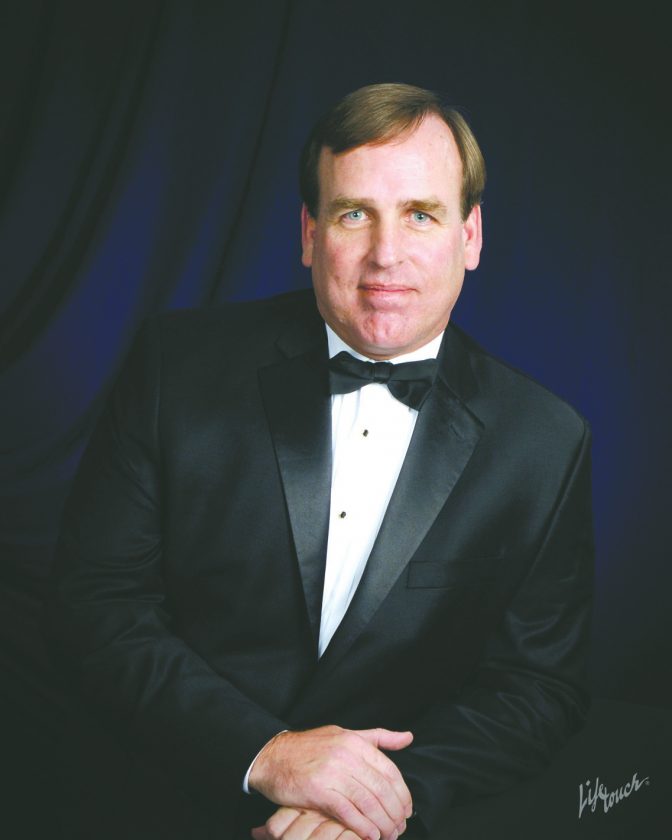 Additionally, Cotton is the music teacher and choir director at St. Andrew the Apostle Catholic School in Clifton, Virginia and is the director of music at St. Ambrose Catholic Church in Annandale, Virginia.

The choirs under his direction are known throughout the Washington, D.C. metro area for their extraordinary performances. His choirs frequently perform at the White House and the Kennedy Center. At the invitation of the Archdiocese of Washington, Cotton prepared children’s choirs for tapings of the televised Christmas Day Mass at the Basilica of the National Shrine of the Immaculate Conception as well as the live Annual Worldwide Children’s Holy Hour that is broadcast around the world every October.

Cotton has performed as a vocal soloist in Prague and has served as accompanist for children’s choral festivals throughout Europe, South America and the United States. He also played at the Vatican for Mass at St. Peter’s. Cotton regularly serves as judge and clinician for district choral assessments in Virginia.

On Friday, March 29 Cotton is bringing 10 members of his Young Men’s Ensemble to the First United Presbyterian Church in Silver Creek where one of his most influential teachers is a member: Nancy Krestic. The concert is in honor of both Krestic and another influential Silver Creek teacher, Karl Hawes, who passed away in 1992.

Speaking of his hometown, Cotton said, “It’s such a small community, and I feel like it gave me so much. A lot of that was Nancy and Karl. I’m proud of what I’ve accomplished with my group, and I’m very excited to share it with Nancy.”

Before their retirement, Krestic and Hawes were the music teachers and choral directors at Silver Creek Central School. According to Cotton, both teachers encouraged and inspired him through his participation in their ensembles.

“While back in school I never could have imagined all the things I would do and accomplish through my music career,” Cotton recalled. “I do remember as a youngster in the third and fourth grade chorus, hearing the fifth and sixth grade choruses at one of the concerts and thinking, ‘Could we possibly ever sound that good?'”

That Cotton is now part of one of the most prestigious youth choral organizations in the country is much more than an ironic twist of fate; it is evidence that a seemingly impossible goal can be achieved if one is willing to do the work — and take the risk.

Cotton recalled one such incident with Hawes. “With Karl, I remember always being asked to try out for solos, which of course, I did. I remember him wanting to make me a tenor at one time because he needed more of them. Reluctantly, I did for awhile, until opportunity presented itself. I must have been a senior and was elected to be the president of the chorus…a position I wasn’t sure I wanted. I asked Mr. Hawes if I had to and recall that he was not very happy with my response. So, I said I would be president if I could move to the bass section. Even back then it seems I took advantage of opportunity!”

As it turned out, the move was the right decision.

“I remained a bass throughout the remainder of my senior year,” Cotton said. “I remember with Nancy, the first time I accompanied one of the choruses. The song was ‘Do You Hear What I Hear’ and I remember walking off stage and getting a big unexpected hug from Nancy. I was sold!”

Music provided a niche for Cotton at a time when many high school students struggle with fitting in. “Music was my world at school and the place where I felt like I had something to offer,” Cotton reflected. “Nancy and Karl helped provide that sense of pride and accomplishment by recognizing something in me that perhaps I didn’t even recognize in myself, and really allowed me that outlet for my talent.”

At 14, he began piano lessons with Krestic, and within a year, he began to accompany some of the school’s ensembles. At one point, Cotton accompanied five of the six ensembles between the elementary and junior/senior high schools. “I really think that my piano lessons helped to solidify my pathway in music,” Cotton said. “(Singing and piano) were two of my favorite things and through choral music, I was able to be a part of both.”

It has long been a dream of Cotton’s to return to the area to thank his teachers and community for supporting him in his early years. Most of his family still lives in the area, including a sister in Fredonia with her family, two sisters and a brother in Sheridan with their families, and his mother, Sandee Weaver, who is a resident at Chautauqua Nursing & Rehabilitation Center.

“I always look forward to seeing my family and try to spend as much time in Sheridan as possible,” said Cotton. “I hope to come home someday when I retire.”

On Friday at 10:30 a.m., Cotton’s Young Men’s Ensemble will be performing at Chautauqua Nursing & Rehabilitation Center, 10836 Temple Road in Dunkirk. He is looking forward to sharing the experience with his students who range in age from 13 to 18. “Truth be told, I know part of the reason that they have chosen to be a part of this tour is because they know how much this trip means to me,” said Cotton. “The guys really seem to understand what it’s all about and why I want to share them with my hometown.”

Cotton is grateful for this opportunity to recognize the music teachers who influenced his life. He recalled his father telling him often that as a teacher, he has no idea the impact he could have on a child’s life. Cotton looks forward to introducing the students to Krestic, whom Cotton hasn’t seen in nearly 10 years when he participated in an alumni chorus concert at Silver Creek.

“I have been in touch via emails over the years as well as Christmas card exchanges,” said Cotton. “I used to come and visit her at school while she was still teaching whenever I was home. Unfortunately, I saw less of Karl. When I first went off to college we exchanged letters a few times, and I would visit him at school when I was home from college. Unfortunately, the world lost him too soon.”

On Friday night at 7 p.m., Cotton’s concert at First United Presbyterian Church, 35 Park St. in Silver Creek, will feature members of the Young Men’s Ensemble as well as members of the current Silver Creek Select Chorus and the Chautauqua Youth Chorus, which Krestic founded.

On Sunday morning, the Young Men’s Ensemble will be performing and participating in the 10 a.m. Mass at St. Hyacinth Church, 295 Lake Shore Drive East, Dunkirk.

Although there is no specific theme for the performances, audiences can expect a variety of music ranging from Renaissance composer Tallis to more contemporary works that include barbershop tunes like “Coney Island” and Queen’s “We Are the Champions.” All three performances are free and open to the public.

Submitted Photo Sheridan native Donald Cotton is pictured here with the Young Men’s Ensemble from the Children’s Chorus of Washington, the ensemble that he founded and conducts.