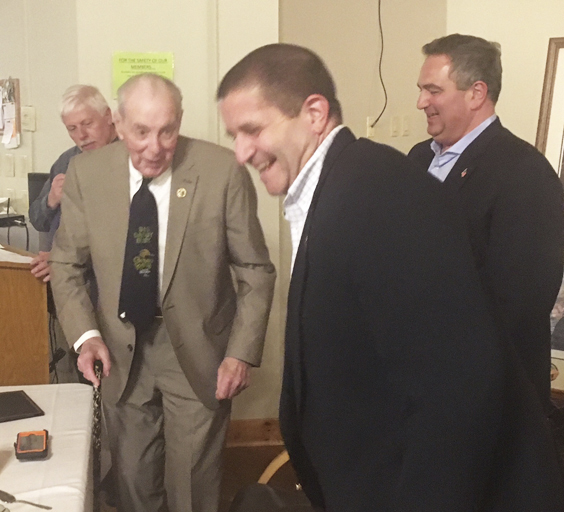 LAKEWOOD — Matthew Terrill addressed more than 200 outdoor enthusiasts in attendance at the Lakewood Rod & Gun Club on Monday evening to share his appreciation and admiration for someone he considers as his grandfather. The timing could not have been more perfect.

James E. Farrell, a Portland resident, is known by many of those he touched as “Big Daddy Duck.” It is a tribute to his passion and inspiration for educating thousands of youth from the region in conservation of our nation’s resources.

So, fittingly on Earth Day, Farrell was honored by the Chautauqua County Federation of Sportsmen’s Clubs during its 12th annual Harry Probst Memorial Banquet. Immediately following Terrill’s impromptu remarks, Farrell — who served for years as Ducks Unlimited state chairman — had a surprise for his longtime “administrative assistant.” At the time of that promotion, Terrill was only 7 or 8 years old.

“He was the greatest helper I ever had,” Farrell said, spurring a “Hello” from his wife who was seated in close proximity. “Well, not including Patti.”

Laughs, as well as a few tears, soon followed as Farrell and his wife unveiled a hat that Terrill once wore through the Greenwing program that was overseen by Farrell for years. Through his tenure of state leadership in the Ducks Unlimited organization, the local efforts and numbers were legendary as Western New York had the highest youth attendance east of the Mississippi with figures ranging from 250 to 385 Greenwings. 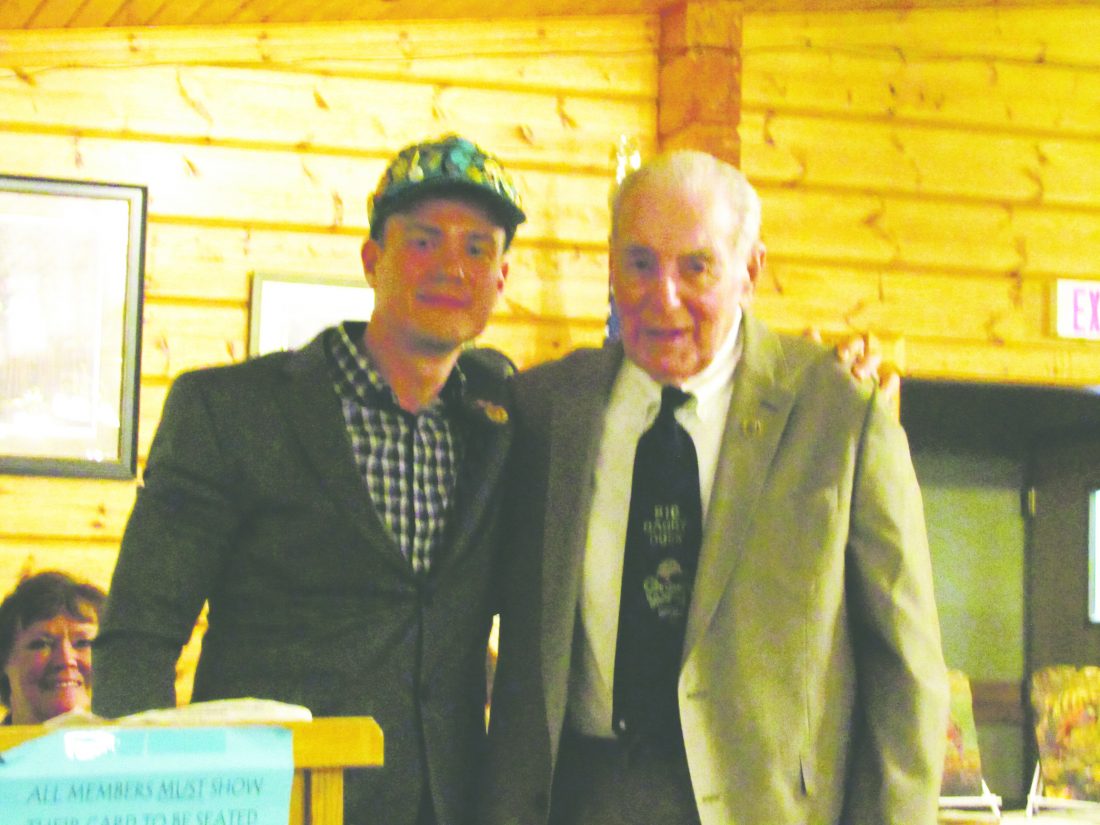 Many involved in the outdoors know the Greenwings as the youth movement of the Ducks Unlimited organization. It promotes conservation, restoration and management of wetlands and associated habitats for North America’s waterfowl. These habitats also benefit other wildlife and people.

That fits in with the lifestyle priorities here in Chautauqua County. Our greatest treasures come from nature, especially our lakes in Erie, Chautauqua, Cassadaga, Bear and Findley Lake.

Possibly one of the largest events Farrell oversaw during his tenure of volunteering occurred Aug. 13, 1994, at the Westfield Fish and Game Club on Ogden Road. Besides area youth, this Greenwing happening of more than 400 people drew children and adults from as far away as Pittsburgh, Charlotte, N.C., and Ann Arbor, Mich.

“It was just tremendous,” Farrell recalled of those days.

Andy Joy, a Fredonia resident, also fondly remembered participating in those events and how his “crazy addiction to waterfowl” was due in part to Farrell’s contributions. “I was one of those … that every year looked forward to Greenwing day,” he said. “That was what the summer was. Go to the fair, do things at the fair … sign up for Greenwing day.”

But as times change, priorities of society do as well. The Greenwing day that was once so popular is not in existence today. “How sad is that?” Farrell lamented in his remarks. “I’m almost going to have to come out of retirement.”

It was a call to action. Zen Olow, president of the Chautauqua County Federation of Sportsmen’s Clubs and banquet organizer with his wife, Rosemary, made a plea to get the Greenwing program going again in the county. There may be some interest as discussions were already underway earlier this week.

In the meantime, Farrell has one more important engagement. On Saturday he will be inducted into the New York State Outdoorsmen Hall of Fame for 2019.

Olow will introduce Farrell, who received plenty of regional support in the form of 14 letters from other Western New York outdoor advocates and Hall of Famers, during the ceremony in Canistota. That’s one more high honor for a man who served his country as a U.S. Marine in the Korean War, as a New York State Police investigator and a Chautauqua County sheriff’s deputy in marine patrol.

“He’s in select company,” Olow said. No one can deny that. 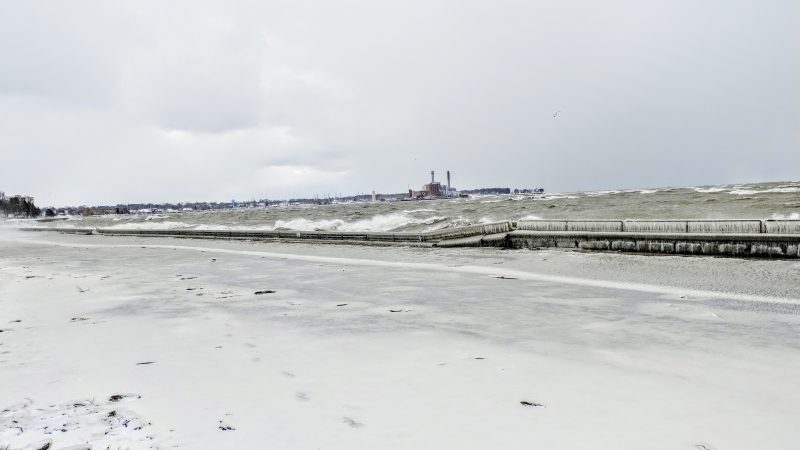 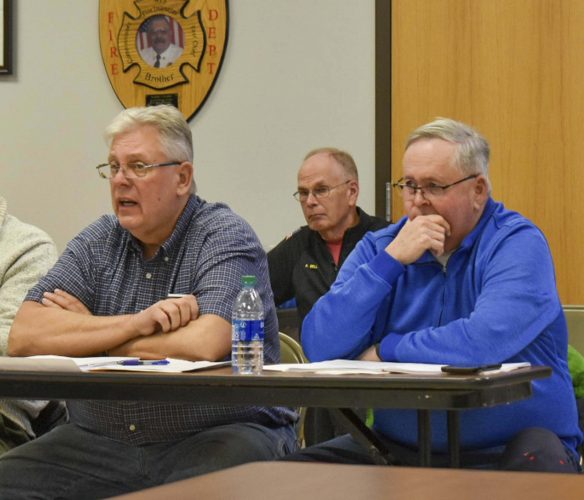 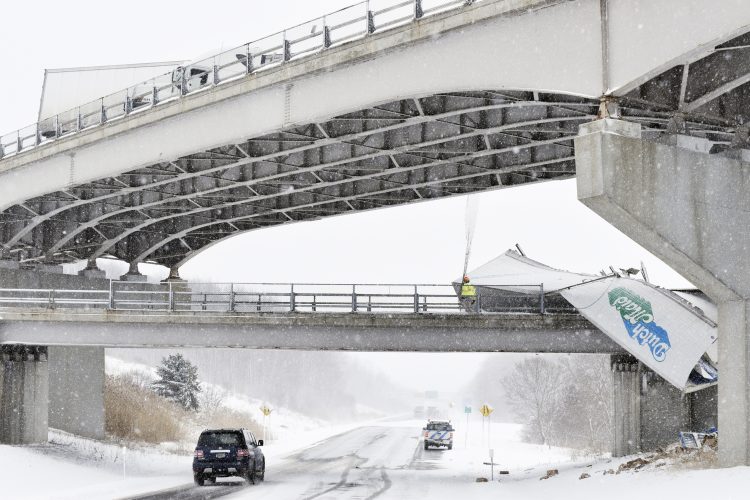