Many got us hooked on idea for outdoors, fishing show 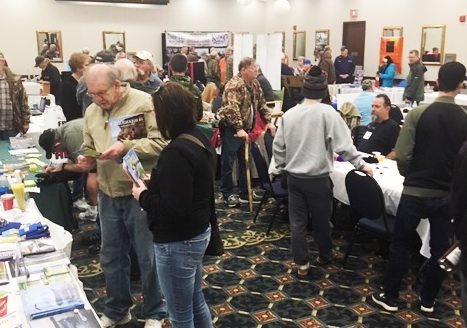 Former Harbor Commission chair Jim Nichols provided a gentle, yet forceful nudge when it came to making the first Lake Erie Outdoor & Fishing Show happen last spring. It began on a June afternoon in 2017 while I was in the OBSERVER offices.

“You’re coming to the next Harbor Commission meeting,” he proclaimed in a telephone call, without offering the chance for a response. Nichols, who was always assisting behind the scenes when it came to the annual Great Lakes Experience and a number of other city initiatives, was thrilled with the idea of the event. It highlighted his vision for Dunkirk that considered Lake Erie not only as a resource, but an engine for the future.

His sentiments, as usual, were correct. We all need to do more to promote our waterfront.

Though Nichols passed away on Feb. 4, 2018 — two months before our inaugural show, the seeds had already been planted. There was no going back.

Last April 21, after more than a year of gathering information and reaching out to potential partners, that first show took place. Many deserve credit for helping organize the happening.

Its genesis came after short meetings with Gene Pauszek, OBSERVER outdoors writer, and Zen Olow, Chautauqua County Sportsman President, in the winter of 2017 at our East Second Street offices.

The premise was based on this newspaper having a greater presence in boosting the fishing here as well as the waterfront.

While both outdoor enthusiasts embraced the concept of a show, they urged me to speak with Andrew Nixon of the Chautauqua County Visitors Bureau and Tom Bergstue, who had organized similar shows at the Chautauqua Suites. Their background and suggestions gave us a road map to move forward.

That’s when our OBSERVER staff started reaching out to a number of potential interested parties — from the county and region. When many were receptive, we figured it would be something the sportsmen and women would support.

Our next step was finding a venue. We contacted the Clarion Hotel Marina & Conference Center. Martha Frey and her staff have been super in their support and allowing us to use the facility. Its location also made sense, with the lake in the background.

Shortly after that, the list of vendors, sponsors, food trucks and those interested in attending started to grow. As many who attended last year already know, the first show exceeded expectations. Our second event, from 10 a.m. to 4 p.m. Saturday, is even larger and includes five presentations that begin at 10:45.

Spring also seems to be in the air this weekend. The ice on Lake Erie is melting with temperatures are expected to be in the 50s.

Tickets for the event are $5 and will be available at our offices today and at the door on Saturday. We hope to see you there.