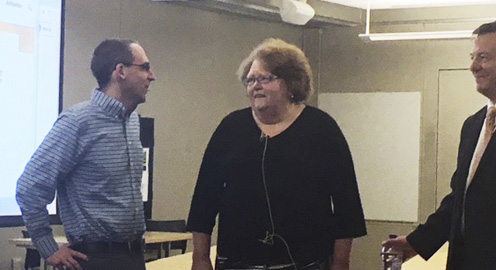 Ann McCarron Burns was in unchartered territory when she was hired to oversee Public Safety at the State University of New York at Fredonia. In accepting the position, which was offered by then college Vice President Robert Coon, she became the first female chief in the SUNY system.

“It was a tough transition,” Burns said about taking the helm in 1982.

Acceptance did not come easy. Burns, in her first year, faced discrimination from some local police officers and chiefs at that time just because she was not male. In fact, she recalled, there may not have been one woman who served on any of the local police forces.

Fortunately some of the local chiefs at that time, including Dunkirk’s Edward “Scrappy” Mulville, assisted Burns in learning the landscape of northern Chautauqua County as well as the key players in law enforcement. For that, she is forever grateful.

“Once some of the really seasoned veterans (in local police) took me under their wings, then I was kind of in,” she remembered.

Relationship building, especially with students, has been a key cornerstone for Burns since that first day at the university.

It is how she earned the acceptance for her work from the local departments in the beginning while being revered by state and federal law enforcement officials in recent years.

Even last week during a presentation on dealing with the active shooter phenomenon, FBI special agent Brent Isaacson assured those in the audience at the university’s Williams Center about its law-enforcement department’s leadership over the last three decades. “You’re blessed, truly blessed, on this campus to have just a fantastic police department,” he said. “It’s highly trained, highly skilled.”

Isaacson’s brief remarks during the presentation were high praise for Burns, who recently announced her retirement as University Police chief that takes effect on July 1. Her 37-year tenure of a department of 10 officers and four lieutenants has been dedicated to serving the university and its students. Even on the vehicles on campus, the motto is “Protecting SUNY’s Finest.”

“The two things you need to have to be a good officer is you have to be honest and kind,” Burns said. “We always look at law enforcement … as being filtered through the heart. That’s the way we treat students.”

This past weekend is traditionally one of her busiest. Even though the university is no longer affiliated with Fred Fest, Burns and the force she oversees are involved in the party weekend.

On Monday, there was plenty of paperwork and communication with the Fredonia Police Department. All told, there were more than 100 arrests.

Not-Fred Fest, as it is now known, has become an exclusively off-campus event that includes lots of house parties, noise and rubbish. That is not the way it was in years past.

At its inception, Fredonia Fest was as a year-end gathering that included concerts and food. But once the music ended, the happening moved elsewhere. “We couldn’t keep the students on campus,” she said. “By 10 o’clock they’d be into the house parties.”

Burns also oversaw one of the most significant changes during her tenure: the transformation of the agency from being Public Safety to a university Police Department in 1999. That controversial decision, led by then university President Dennis Hefner, made it possible for the officers to carry guns.

Today, especially with the rash of campus and school shootings, there is support from the administration — and certainly the parents of incoming students — regarding the arming of the officers. “Everybody here is trained in the active shooter protocol,” she said. “(Parents) like to hear that we’re prepared and it’s only going to take us minutes to get to a situation as opposed to an outside law enforcement agency.”

On May 18, the outgoing University Police chief will be in attendance for a celebration she cherishes each year: commencement. It will be one of her final duties as the spring semester winds down.

Burns relishes the support she has received from the administrations and presidents she has worked for, including most recently Hefner and Virginia Horvath. In 2017, Horvath presented her with the Heart of Fredonia award. It meant a great deal. “You never know how people feel about you until something like that happens,” she noted.

Coming to our region from the University of Missouri at Columbia, the outgoing chief thought her current position would be a temporary stop until another opportunity came along. It was too late. She had already made a connection with a special village.

“I couldn’t go,” she said. “Fredonia kind of hooks you. It’s a wonderful, warm, welcoming kind of place.”