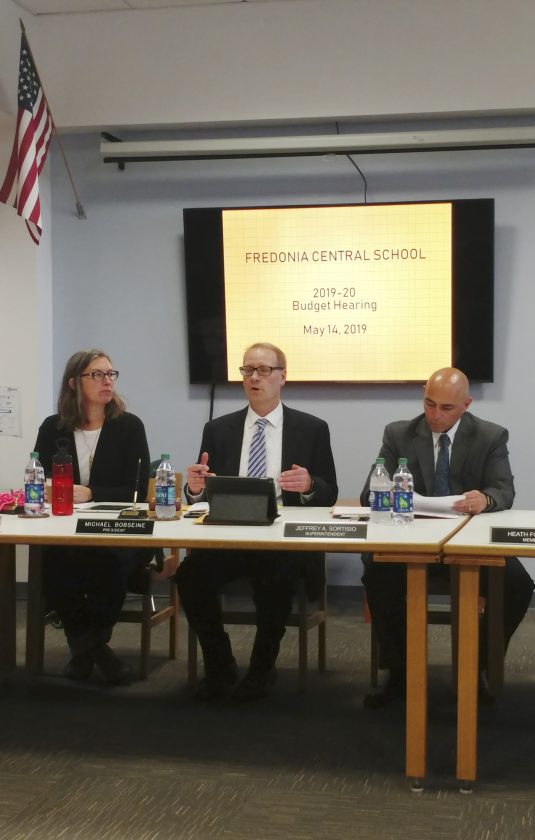 No one from the public spoke Tuesday as the Fredonia Board of Education formalized its 2019-20 budget proposal for the May 21 ballot.

John Forbes, district business administrator, attributed that to a big drop in debt service because the Vision 2020 bonds are going off the books. The district will spend $2,396,275 less in debt service in the 2019-20 school year, a decrease of 73.7%.

Forbes also noted a health insurance savings of 3.2% in the 2019-20 plan due to a switch in coverage plans.

District employees’ salaries are going up 1.84%. Forbes said the proposed budget adds three teachers in the middle school and one position in the business office. It accommodates five retirements of teachers along with the replacement of all five.

After Forbes’ presentation, and a public hearing on the budget that had no speakers, the board approved the budget as a proposal for the May 21 district election. It also added a second proposition to the ballot, that the district start a capital reserve fund for construction work. The fund would be capped at $750,000 and that amount would be put together over a 10-year period.

Superintendent Jeff Sortisio, an advocate of the fund at recent board meetings, said on Tuesday, “It’s a good way to use positive fiscal times to offset future costs.”