Creativity can be an engine for county 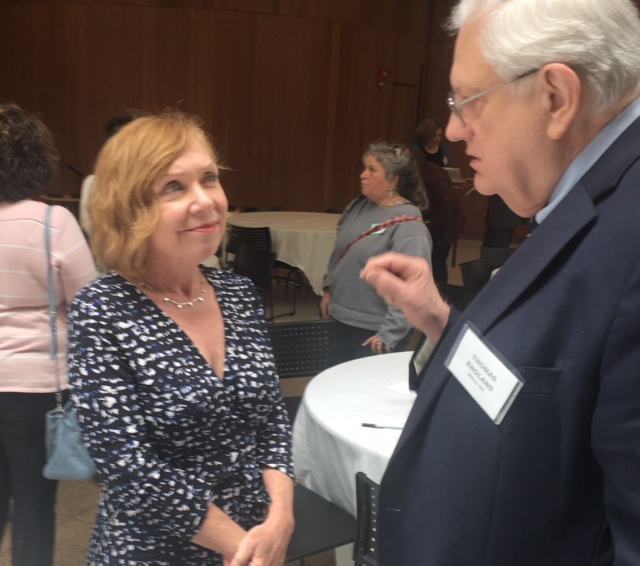 Talk about having an identity crisis. When many residents in Western New York hear the term Capital Region, the first thing they may think about is Albany and state politics.

That is not how Maureen Sager, executive director of the Alliance for the Creative Economy, would want us or anyone else to identify with that section of eastern New York, which borders on Vermont and is 2 1/2 hours north of New York City. Instead, she has a broader vision — one that her and a team of others have been working on over the last seven years. It spotlights the arts and cultural institutions that includes a recipe of history, museums and entertainment in the eight-county area that is home to 1 million people.

“These are destination items,” she told an audience of about 100 community members in the Williams Center on the State University of New York at Fredonia campus.

“People will come travel to see them. That’s the first part of your creative economy that you might want to think about. What has a national … or a regional reputation.”

Before speaking at the Northern Chautauqua Community Foundation’s Local Economic Development group summit on Tuesday, Sager took a road trip around a portion of Chautauqua County. Her stops on Monday included the National Comedy Center in Jamestown, Chautauqua Institution, county Route 394 to state Route 20, which included views of Chautauqua and Lake Erie, the SUNY incubator, as well as the downtowns of Fredonia and Dunkirk.

To Sager, it was a positive first impression of our area that includes a number of possibilities to begin encouraging and promoting more creativity that lends itself to economic development. In just her six-hour whirlwind tour, she saw national and global institutions as well as two major waterfronts. What part of the United States would not want that?

Obviously, some of that energy is already here. On Memorial Day weekend, the Chautauqua-Lake Erie Art Trail brought thousands to see paintings, pottery and ceramics to a number of households and shops. In Fredonia, where a rich history includes the first Grange and gas well, there is an Opera House that will be showcasing a highly popular Bach & Beyond event for its 24th year next weekend.

Even in the private sector, there has been some recent openings that are worth notice. DK Laser on Central Avenue in the city is building momentum while the Blue Dragon Inn in Fredonia provides a vibrancy around Park Place in the evenings in the village.

A study commmissioned by Sager’s group found creativity on her side of the state to be more than just small businesses and a couple of storefronts. It was big bucks — an impact of $1.4 billion, and excluding government, it was the fourth-highest employment sector in the area.

These are not the traditional line of manufacturing employees. Many are freelancers, those working from their homes or from a shared space, who provide vital services to a region. A portion of this segment are the millennial, who work for an employer, and do what they are interested in on the side for additional income.

“We have a higher percentage of freelancers than New York City or Boston does,” Sager said. “That’s probably because it’s cheaper to live in the Capital Region than it is in the city. … (Chautauqua County is) an affordable area too and there advantages to that. The cities are becoming unaffordable.”

Sager says her organization is working to nurture freelancers by bringing them together and promoting partnerships that could lead to additional employment. “That’s a major economic driver in our region,” she said. “That’s one of the things we see as the future for us is to link these people together.”

One freelance gathering brought more than 150 people coming together. To the many who attended, it was liberating and therapeutic as they were able to discuss the obstacles and challenges they face as independent contractors.

For the rest of us, Sager stressed the importance of telling our county’s story to market our cultural tourism and bring in new residents. That brings us back to what we already have and must promote more of: local history, natural beauty, laughs and learning.

“A strong regional identity attracts and retains talent,” she said. “You can’t attract talent if you can’t tell someone about the place you live.”

At a dinner meeting with Sager the evening before the summit, a group of Local Economic Development members noticed an art class taking place with millennial participation on the second-floor of EBC West in Fredonia. It served as a significant revelation: the creative economy is here and has the potential to grow.