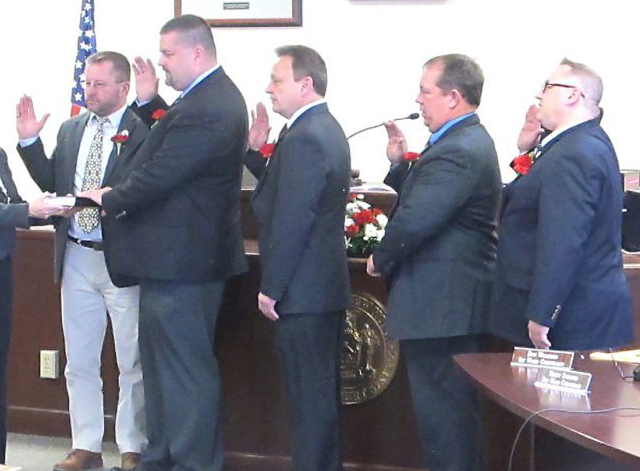 OBSERVER Photo Dunkirk council members often raise their hands when a resolution adds to the city government or serves them for the future.

How the tables have turned when it comes to the major local governments in the last 12 months. Nearly one year ago today, this corner was focused on the continuing chaos with the village of Fredonia administration. Transitions were taking place regarding the administrator position and still in the early stages with a new Department of Public Works director.

Today, despite some continuing banter at board meetings, Fredonia has made some smart choices and appears to be making progress. Dunkirk, on the other hand, has taken some steps back as Common Council members do not even appear to be trusting of themselves.

How else do you explain a vote earlier this month that puts an end to walk-in resolutions? If those who are elected are unsure or do not agree with a resolution brought forward, the answer is simple and already in their hands: table the legislation or reject it.

He is exactly right. But this bumbling, melancholy group thrives on debating minutiae, including loud speaker permits, while the significant happenings, such as a city stabbing death in May or the empty storefront corridor of Central Avenue, gets ignored.

Besides that, in the larger picture, the walk-in resolution vote exposed the battle lines for the coming election. Those who oppose the law, Second Ward Councilman Martin Bamonto and Civiletto, have aligned with incumbent Mayor Wilfred Rosas.

Those who pushed for this meaningless act — apparently afraid of their voting past — are sending a message in backing Third Ward Councilman Shaun Heenan for the city’s top spot. That includes Andrew Woloszyn, councilman at-large, who is taking a more vocal tone now that he is not running for re-election, and Don Williams Jr., in the First Ward, who always considers himself before his constituents.

That is not being too harsh.

Consider this action alone, Dunkirk voters: one of the priorities for this legislative body, spearheaded by Williams, is to go from two-year to four-year council terms. There was no public outcry for this to happen, just elected members attempting to avoid being accountable through an election every two years to those they represent.

Don’t believe the Williams’ rhetoric of him wanting voters to decide on the issue. The selfish referendum on the ballot did not have to happen, which makes his rationale disingenuous.

It bears no benefit to city residents, who will vote on this proposal in November. Those in office are the only ones who can gain.

Obviously, there is plenty of angst against this council crew. Every seat is facing a challenge but one. That is an indication the term proposal is more about protecting those elected than serving those they represent.

But it also falls in line with how this council thinks. Again, most of their actions in the last two years have either served themselves or helped continue to build on an already bloated city government that spends 23 million of your dollars annually.

Those items approved by council members in the last 18 months include:

¯ Adding a human resource director to the administration in David Campola in February 2018. Both Heenan and Williams approved this action that apparently is not popular with the city workers and its unions.

¯ Purchasing the Stearns Building that neighbors City Hall for under $200,000, taking the property off the tax rolls while allowing government’s footprint to grow. Williams backed this as well with Heenan casting the lone vote of opposition.

¯ Adding a budget line of $5,000 for additional legal counsel for the legislative body, another resolution led by Williams.

¯ They renamed a pavilion at Point Gratiot in February, another motion approved by Williams but opposed by Heenan and Woloszyn. Big whoop.

¯ They finally got into the 21st century by accepting credit cards payments for city service. As an added bonus, those residents who pay with plastic can expect to be hit with an added fee.

Dunkirk, like any government, has its share of problems. But when considering if this council is really working for the city, take a look around.

Rosas may deserve some of the blame since he’s at the top, but council members vote. Do not let them off the hook.