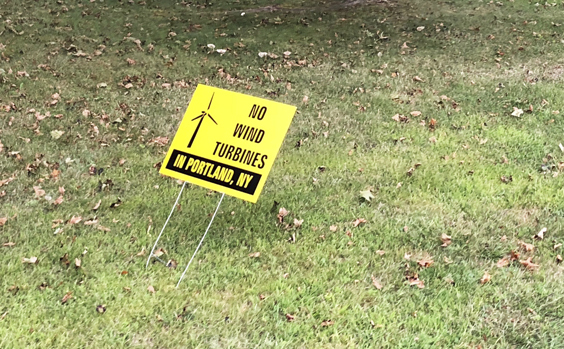 OBSERVER Photo More signs like this one are starting to be noticeable on Route 20 in Brocton and Portland.

PORTLAND — Motorists driving along Route 20 are beginning to see lawn signs regarding a divisive issue that has become highly talked about in this town: the prospect of wind turbines. This is far from anything new to the north county region.

Around 15 years ago, the towns of Westfield and Ripley were fairly united in a campaign against the windmills. Many bumper stickers and placards noted at the time, “Good idea. Bad location.”

One of the reasons for the opposition then was the Lake Erie shoreline is a major migration path for hawks and eagles. The turbines might place these birds at risk.

Residents in those municipalities kept up the fight until the issue quietly went away.

Today, however, other municipalities are being targeted. Far too many of them apparently are ripe for the picking.

Why? They fit the profile.

Our region is filled with small towns that are desperate for any type of investment.

In addition, Chautauqua County has a poverty rate of 17.7 percent for its 127,500 residents, according to the most recent U.S. Census numbers. Quick money is the solution to both these problems — and that is what the highly subsidized wind companies thrive upon.

That does not mean their structures are as environmentally friendly or efficient as proponents would like many to believe. In a Wall Street Journal commentary “If you want ‘renewable energy,’ get ready to dig,” from Aug. 6, the environmental toll comes down to this: “Building one wind turbine requires 900 tons of steel, 2,500 tons on concrete and 45 tons of plastic.”

Gifts of nature also pay a high price. On Boutwell Hill in Cherry Creek, major construction vehicles are clearing trees and forest in preparation for the Cassadaga industrial wind project. It is very similar to what occurred in Arkwright as well. When “green energy” is being installed, nature’s “green” is quickly destroyed in rural America.

It is not just in our county. It is throughout New York state.

Find a region that is struggling economically — or looking for quick cash — and the wind companies are more than pleased to fill a void.

Arkwright, back in 2004, understood its tax base was stagnant. It pursued wind developers that ultimately led to the RES project that was completed last year.

It was the first domino to fall. Neighboring Villenova and then Cassadaga also saw the dollar signs that led to additional projects.

Earlier this year, Portland came into the mix when EWT announced it was looking at bringing in at least 10 turbines to the municipality that each stand at 326 feet. It has made town board meetings here must-see, standing-room only events.

On Wednesday evening, board members and residents filed into the town hall room that allows for an occupancy of 98 people. At one time, there were about 70. Chairs had to be brought in to accommodate the large audience, which had differing opinions but remained respectful.

Portland is in the midst of a six-month moratorium on applications and permits for turbines. That concludes in late December. Board members are currently looking at how other communities have coped with the prospect of wind development.

It is less than comfortable for those who serve. Elected officials in recent months have been inundated with studies, Internet links, legal advice and letters regarding the topic.

This won’t just blow over.

Lake Erie is one more venue for the wind developers. At 1 p.m. Sept. 19, the Erie County Legislature will hear about plans for offshore turbines that could stretch from Buffalo to Dunkirk.

This is where it gets complicated. State Gov. Andrew Cuomo, who is on record against fracking, appears content with turbines being built in our freshwater Great Lake. What happens if the water that we all depend upon becomes contaminated through a heavy construction project like this? Then what?

It is one more potential life-altering decision that awaits our local, and regional, representatives.