Dissension in the air: Villenova hears pros, cons of turbines 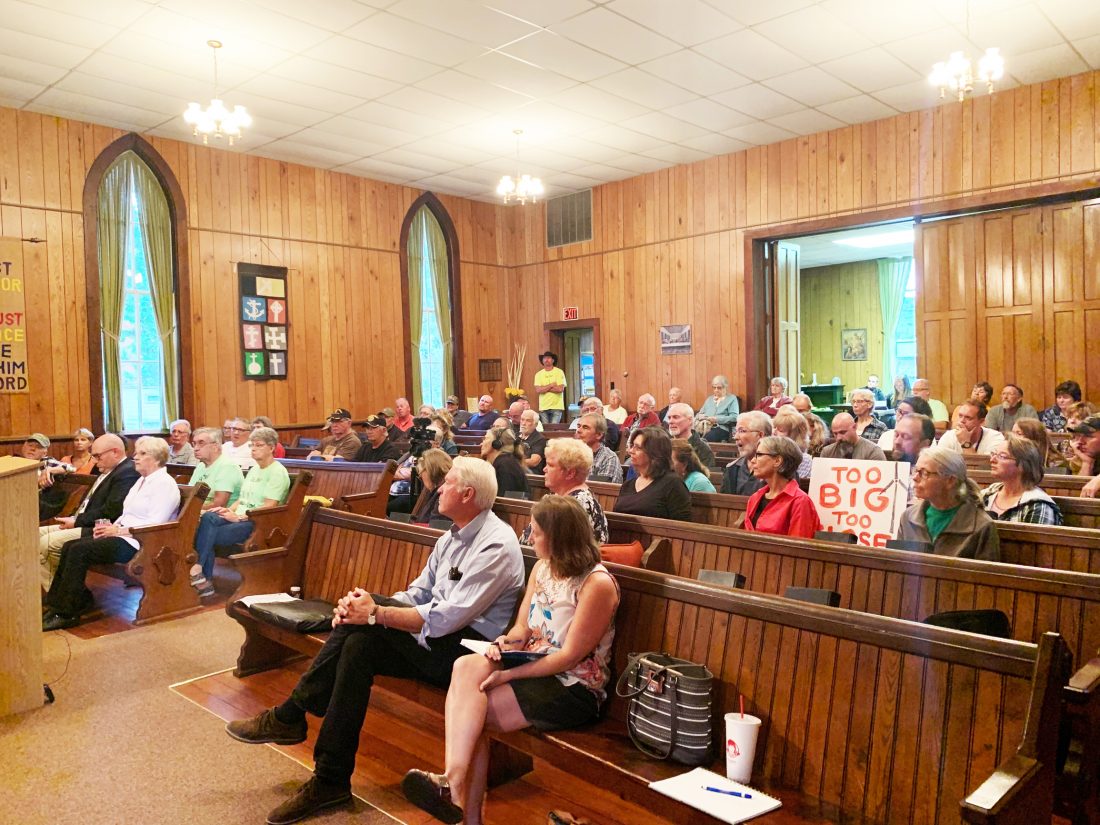 OBSERVER Photo by Jo Ward A large crowd of concerned county residents, gather at the Hamlet United Methodist Church Wednesday to discuss the coming wind turbines and their effect on the area.

Residents packed the Hamlet United Methodist Church on Wednesday, as the three-minute rule was laid out and expectations explained. Each person took turns sharing their views, concerns, statistics and opinions, both for and opposed to the project.

The hearing was the result of a decision by Chautauqua County Supreme Court Judge James H. Dillon on June 24, which put turbine construction on hold until a new environmental impact study was conducted regarding the proposed turbine height increase from 495 to 599 feet.

“I don’t have any hard evidence, but I can definitely tell you that in the last six months following the Arkwright Wind Project, we have had a major increase in referrals of patients with idiopathic vestibular issues, syncope, migraines, seizures and strokes,” Evan Davis, a registered nurse and new resident to the area stated. “Has anyone done any surveys on the long-term effects of these wind turbines on humans let alone animals? Have they done surveys on what the effects of increasing the heights of these turbines is going to have on our families and loved ones? This is just a gross injustice of our rights as citizens and tax paying members of this community.”

Susan Baldwin, a longtime Villenova resident told a story of trying to call 911 three times in a row, to report an accident outside her home. According to her, calls kept dropping. In the end she explained that it took 40 minutes for police to arrive on scene, luckily, the victim was alright for the most part she added. Baldwin stated that when she questioned the police on the issue they, according to her, claim that calls get dropped all the time due to cell service. Following the reveal of this information Baldwin traveled to Verizon on Tuesday and was told “we had an inservice with the turbine people two years ago and they said that they’re going to put the turbines directly away, positioning for your house to not get missed and dropped calls. They are constant.”

Julie Delcamp, another registered nurse and resident spoke of the Aug. 14 meeting, claiming that though there was a public portion, no one was allowed to speak.

“I was at that Town Board meeting on Aug. 14 in which that agenda had privilege of the floor listed, but the board refused that privilege to anyone at that meeting.”

Patricia Greenstein, a resident of Cassadaga for over 30 years had her home appraised in 2018. Greenstein claimed that when listing their house that the realtors told them to decrease their price by $20,000-30,000 due to the turbines coming into the area there.

Kristin Baldwin, a Cherry Creek resident, talked of the “good neighbor” agreement she was given and refuses to sign.

“If I sign this, we’ll give up our rights. If signed in 30 days you get a $500 bonus and $1,500 as long as the project is going,” Baldwin shared. “I will never sign this agreement. It says here that if you sign the agreement that they can do whatever they want to your property. It doesn’t benefit our community or habitat or health; there’s so many areas where they can do this where there is no population at all.”

On the other side of this argument was Matt Aldinger, a resident of Forestville who supports these projects, claiming all the good they are doing and will do fiscally for their communities.

Aldinger pointed out that saying “in our back yard” is a biased statement in his opinion. “Do you own the property that the turbine is on? No. Then it is not technically your back yard. As far as the birds go, I haven’t seen piles of dead birds under the ones in Arkwright. Cars hit birds, the thruway makes noise, trains make noise. I sleep better at night because my taxes is going to go down,” Aldinger added. “The reason there’s no farmers here that you claim will be upset is because they can’t afford to keep the land, our roads are terrible, the township cannot afford to fix the road. I’ll sleep better when I’m not hitting potholes and my vehicle’s not falling apart. We’ll have money for infrastructure. When was the last time anyone came to Villenova and wanted to spend this kind of money? There’s going to be new jobs too. Good things are going to come from this.”

Doug Fairbanks, chairman of the planning board for Arkwright when their project went in shared Aldinger’s sentiments. “I’ve got no problems with them. I wake up with them, I love them. You bring money into an area, you bring jobs, it’s a good thing for the community. You have to stop getting hung up on these opinions and just start looking at the big picture,” Fairbanks stated. “There’s claims that it’s going to take 25 years before they eliminate their carbon imprint, how long was the steel plant going to take before it got rid of its carbon imprint? I own 600 acres and I didn’t get one. I’ve got friends that have two of them.”

When speaking with a friend that has three turbines on his property he asked if they were as bad as people are saying. His friend then apparently claimed that “every once in awhile he has to close his windows and turn his air conditioning on at night.” A short story told afterwards shared that they (Fairbanks and friend) couldn’t hear them over the washing machine.

The Villenova Town Board will meet Wednesday for their regular meeting. A public hearing is to be held at that time in regard to the dissolution of the Planning Board.