Region still too comfortable in decline 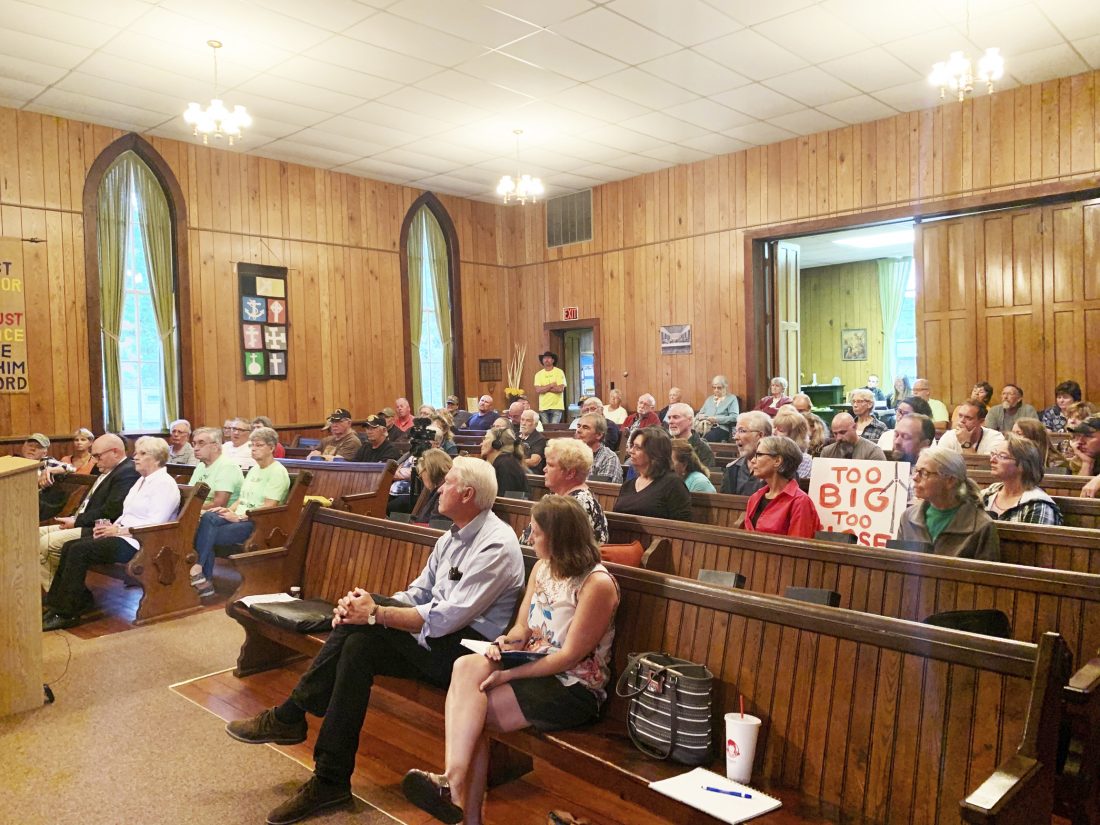 Over the past year, controversial plans for wind towers have drawn crowds at many meetings, including this one in Villenova. OBSERVER Photo.

Municipal leaders rarely have a vision for the future. Instead, elected officials just hope to maintain on what they have from year to year.

That is always an issue when the budgets are proposed. Everything is tight. There usually is no room for additional spending.

Obviously, it is because this region — despite some recent good news with development and grants — is not growing. It is still in decline.

But, in the era of social media, no one wants to get bogged down in the minutiae. They just want to offer a two-sentence opinion on what they think is wrong.

It is no way to solve the problems.

Since beginning our annual report card for municipalities in 2012, this corner has found some progress, but the reality today is the status quo is alive and well. It is one of the reasons Sinclairville, which sometimes cannot even find candidates to officially run for office, did not dissolve.

Too many are worried about losing an identity that means little to nothing when talking about New York state and our nation.

Take Forestville, for instance. Even though the village has dissolved, there is a strong grass-roots effort by residents and volunteers to make things happen.

The group goes by the name of Imagine Forestville. They not only attend Hanover Town Board meetings, but they also help beautify the hamlet and are working on an effort that would keep their “hometown the special place that it is.”

This group of individuals, led by Aimee Rogers and Cathy Kaicher, deserve what governments can hardly deliver — a grade of A+.

Here is this year’s breakdown of the towns, villages and the city, with last year’s rating in parenthesis:

¯ Arkwright — A new group of leaders, the Arkwright Advocates, will be in charge of this tiny town government in January. Many have stepped up because of their opposition to the turbines, which have brought in new revenue. How will this group proceed? Grade: C (C).

¯ Brocton — Village has an excellent attitude toward sharing services and employees with the town. Elected officials understand the urgency for regionalism. Grade: B+ (B+).

≤ Dunkirk (city) — Major changes with shift to Republican Common Council await Mayor Wilfred Rosas. Will anything get accomplished or will it be a two-year standoff between the administration and representatives? Rosas does deserve some credit for building relationships and working with Wells for Fieldbrook expansion. Grade: B (B-).

¯ Evans — Starting to emerge from previous cash problems though it is right in the middle of Lake Erie turbine debate. Grade: C (D).

≤ Fredonia — After years of chaos, village is finally making progress. With new Republican Mayor Douglas Essek starting in January, he is tasked with keeping the momentum going with a board that is made up of a majority of Democrats. Grade: C+(C).

≤ Gowanda — Village has an energetic downtown that continues to see strong leadership from its elected officials. Grade: B (B).

≤ Hanover — Town has done a solid job of taking over former village of Forestville, now needs to keep working for more efficiencies with village of Silver Creek. B- (B-).

¯ Portland — Town is model for others to follow. Consistently looking for ways to involve residents while working closely with Brocton to become more efficient. High marks to Town Board members and Supervisor Dan Schrantz. Grade: A- (B+)

≤ Sheridan — Buoyed by grants for park and drainage, quiet town continues to be involved with regional efforts through water district and Chadwick Bay. Grade: B- (C-)

≤ Silver Creek — Fountain is fixed, but that is only one of many problems village faces. Grade: C (C-).

¯ Stockton — Not a lot of ruckus in this township — and very little presence in any county or regional meetings. Grade: C- (C)

¯ Villenova — Recent election results show support for some of the tallest turbines on land in the nation. This is another example of a small group of people making major decisions that impact the whole county. Grade: C (C)

Overall, the grade for the 19 municipalities comes out to better than a C+ — slightly above average. It’s an improvement from our first report card of C-, which signals that officials are more open to sharing services and being a part of regional efforts.