At coffee, raising a cup to the Landis years 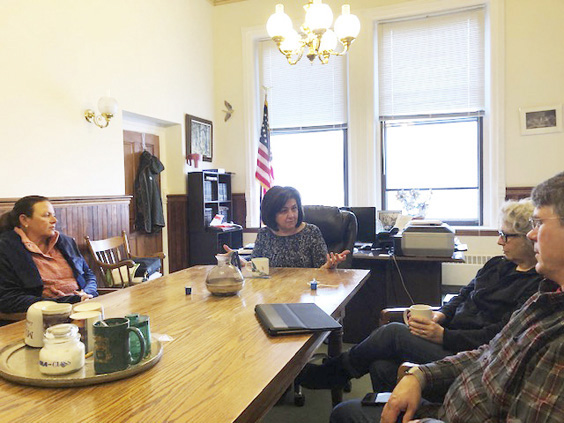 Fredonia resident Debbie Brooks knew this might be her last chance to personally say thank you. On Wednesday morning, following a night of Christmas shopping, she made her way to Village Hall for what would be the final installment of Coffee with the Mayor.

As Athanasia Landis arrived, she was greeted by Brooks’ enthusiasm. The resident was grateful for Landis’ assistance after she was first elected back in 2016. She had just bought a hot tub, but was having trouble with a former code enforcement officer.

After one e-mail to Landis detailing some frustrations, her troubles were gone. She received the proper paperwork from the village to move ahead with the installation of the outdoor amenity.

Details on the small stuff, especially in a village with an annual budget of more than $10 million that serves a population of 10,000, usually receives much more gratitude than making the tough choices.

Those calls all too often upset what can frequently be a delusional comfort zone that appeals to many residents.

But less than five years after losing a major employer and customer of village services in Carriage House, a path and vision for Fredonia could not be what it had been for so many previous decades. That is not always easy for longtime residents to accept.

As higher water and sewer bills were passed on to the users after the company’s announced exit, chaos and disrespect at Village Board meetings ensued. Trustees would regularly give eye rolls to residents who voiced opinions, if not outright responding with snide remarks at the meetings.

It was an embarrassing display.

Landis, who stepped forward as the Democratic candidate when others would not in the summer of 2015, did not have a clear understanding of the disconnect inside and outside village hall. She was coming in new to government and was not a politician.

After being elected the village’s first female mayor, her honeymoon in office did not last. There were major issues to address that had been ignored for far too long. Instead of being overwhelmed, Landis took charge. How she did it was effective and brought results, but it did rub many past elected village leaders the wrong way.

Nevertheless, she worked at building relationships with the city of Dunkirk, Chautauqua County and New York state. It has led to a better way of life for those she has served for four years.

While sharing coffee with Brooks and three others, Landis reflected on some of her achievements. Those cited included finding loans to invest in the wastewater treatment plant that was in dire need of long-overdue repairs and a solution to years of water woes for James Place neighborhood residents.

“This is something I’m very proud of,” she said Wednesday morning of the infrastructure investment. “These people now have clean water.”

Landis also took pride in the connections she’s made in Albany, including meetings with state economic development officials, the regional development councils and the governor’s office. Those efforts led to the award of a $2.5 million smart growth grant from New York state in 2018 — a major achievement when you consider the neighboring Dunkirk won the same award in 2017.

“They never give money to adjacent communities after one year,” Landis was told after winning the grant. “They try to disperse the money in different places.”

Her persistence had paid off.

But the most trying days were likely the key moments that led to her Election Day defeat. Former village Administrator Richard St. George in July 2018 announced his resignation due to a perceived hostile work environment with blame firmly tilted toward Landis. When his position was not refilled, it led to a major division between the trustees and a segment within the village.

Besides looking back, the outgoing mayor talked about what’s ahead. She’s hoping to complete whatever work she can by Dec. 31 on the grants she has played a role in the village receiving. “The projects are going on,” she said. “They have been approved. We just need to keep the timeline.”

She also, after some consideration, has decided she will not be considering the open seat currently held by Trustee Douglas Essek once he takes the role of mayor on Jan. 1. “Not now, but maybe I’ll run in November,” she said.

Toward the end of the gathering, Department of Public Works Chief Tony Gugino stopped by the office with an update on some street work. She offered her appreciation before he went back to his duties.

“Tony is my best hire I have to say,” she said proudly. “I’m so happy the village has him.”