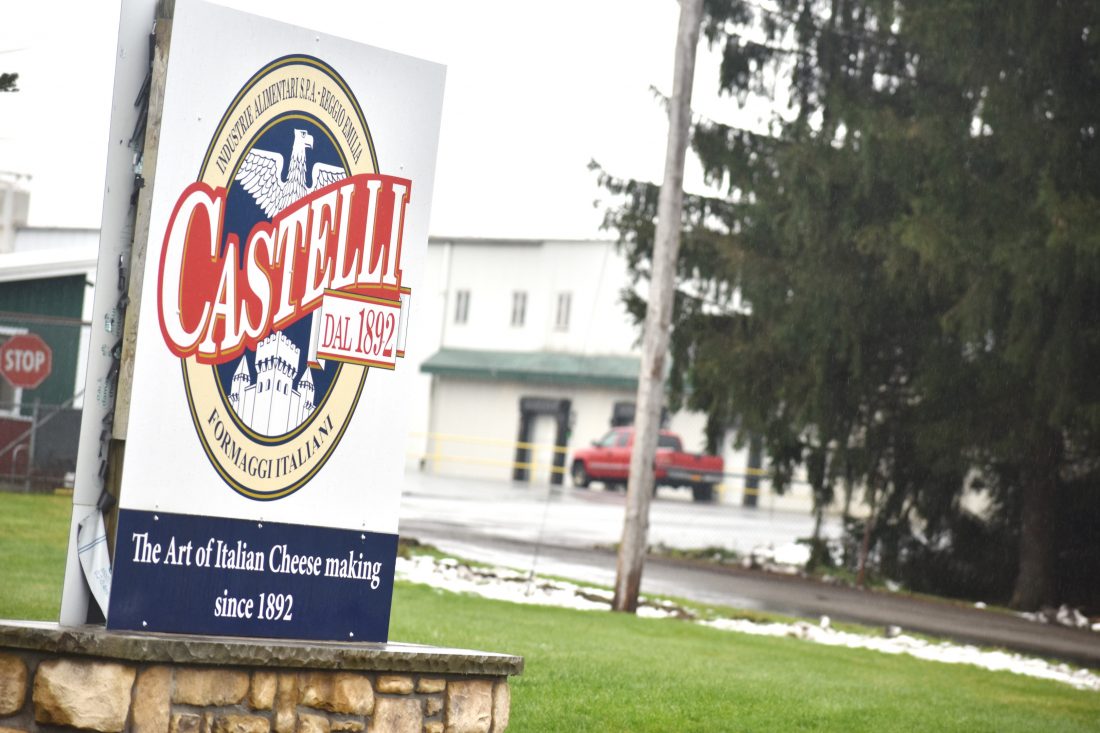 Photo by Jordan W. Patterson The Castelli America plant is pictured at 5151 Fairbanks Road in Blockville. The plant, which was bought in late summer 2016 with hopes of creating dozens of new jobs, closed its doors on Friday impacting 67 workers.

Local officials and the plant’s general manager confirmed the closure and loss of 67 jobs on Monday.

“Well, it’s unfortunate for the town and tax base to lose a business and for employees,” said John Brown, Harmony town supervisor. “We’re very hopeful that someone else can go in there.”

Castelli’s parent company, the Reggio Emilia, Italy-based Nuovo Castelli Group, is a producer and distributor of a variety of Italian cheeses. Nuovo Castelli purchased the former Empire Specialty Cheese manufacturing plant, located at 5151 Fairbanks Road, in Blockville, in the late summer of 2016, and a ribbon-cutting ceremony took place in mid-September.

Since opening, the facility has been the recipient of numerous loans and grants to expand production. Two Community Development Block Grants were obtained in 2018 with the help of town and county officials to allow Castelli America to hire more workers and buy equipment.

“Despite the county, County of Chautauqua Industrial Development Agency, state and federal assistance in the form of low-interest loans, grants and technical assistance, we were informed that Castelli America LLC has been experiencing challenges related to production and sales,” said Mark Geise, deputy county executive for Economic Development and CEO of the CCIDA. “This is a state-of-the-art facility with a ready source of milk producers, and the CCIDA is hopeful that the facility will be attractive to potential new operators.”

Geise said Castelli America has “benefited from more than $8 million in upgrades to its equipment, building structure and waste treatment facilities.”

Don Butler, the facility’s general manager, told The Post-Journal that the plant had recently lost a couple of key customers and said the parent company “was not in a position to fund us.”

Butler added that he was “very saddened by the news, especially given the time of year.”

“We were told Thursday evening that Friday was our last day of operation,” he said. “Certainly we were disappointed. Any local company that closes is bad for the economy and workforce. … Some of the employees were in Thursday and Friday, but not everyone so some had to be told over the phone.”

Brown said he was not aware the company had been considering closing its local plant. He noted the effort town officials made to help secure grants to help Castelli America expand.

The company at the time said it hoped to hire as many as 50 additional workers.

“I think it would be best to get something in there quickly,” Brown said.

Stephen Abdella, acting Chautauqua County executive, alluded to news of a potential sale of Nuovo Castelli to Lactalis Group Italia. Lactalis, the largest multi-national dairy products cooperation in the world, is headquartered in Laval, France, and has several locations in the U.S.

“We don’t know what the sale of Castelli America to Lactalis will mean yet for the Ashville facility,” Abdella said in a news release. “Chautauqua County and the CCIDA are doing everything in their power to assist the company and its employees. We have contacted the Chautauqua County Workforce Development Board to help connect displaced workers with current job openings and available re-training programs. We are also in discussions with the State to help the displaced workers, and to find a purchaser for the facility if Lactalis decides to not keep it open.”

In Europe, Nuova Castelli has 14 manufacturing facilities and 11 distribution centers.

At the plant’s ribbon cutting in 2016, Castelli Group CEO Luigi Fici said increasing employment numbers and distributing a wide range of hard and soft cheeses were among the company’s earliest goals.

“There’s a reason why we’re here. I’m sure it will be a success,” Fici said at the time.