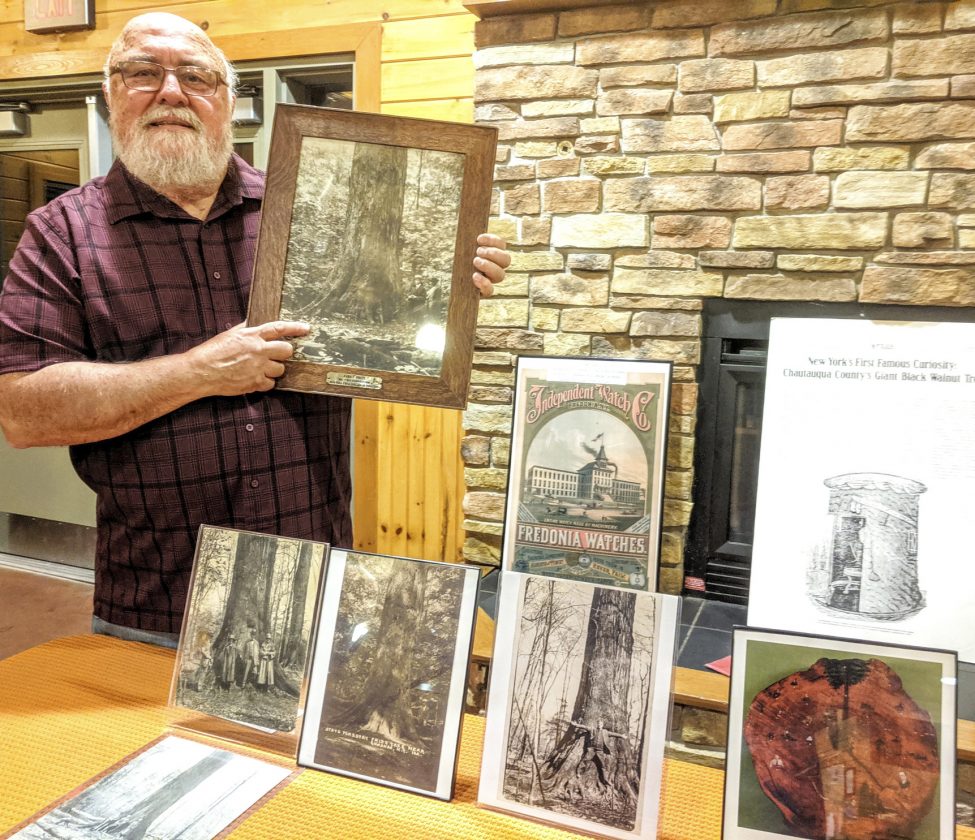 Above left are photos of the Hanover Elm. At right, Vince Martonis is holding the Stearns Lily Dale ink well and the Haven and Kenyon redware flask.

First shown was an 1820s redware flask from the Haven and Kenyon Pottery in Sheridan. The flask was dug a short distance from the pottery site. Martonis related how in 2001 he traded a collection of over 200 family letters which he found in an antique shop to the owner of the flask, along with some cash. The letters were all from the early 1900’s and written by the man’s ancestors who lived in Sheridan and Dunkirk.

Second was a mid 1800s inkwell found in perfect condition in Lily Dale by a collector. On it was the name Harriet T. Stearns and a date. About 1979, Martonis traded and gave cash for the item. Then the research began. He eventually discovered that Harriet T. Stearns was a medium in Lily Dale in the 1880’s. The mystery of the date and the reason why a perfectly good ink well was discarded are as yet unsolved. Perhaps a medium would know.

Another Lily Dale curiosity followed. Martonis displayed four old medicine bottles along with advertising and information related to Antonette Matteson of Buffalo and Lily Dale. She and her daughter sold Clairvoyant Remedies, a plant-based medicine made by her and her daughter, at Lily Dale in the late 1800’s and early 1900’s. Mrs. Matteson went into trance to arrive at the proper formulas for her medicines. 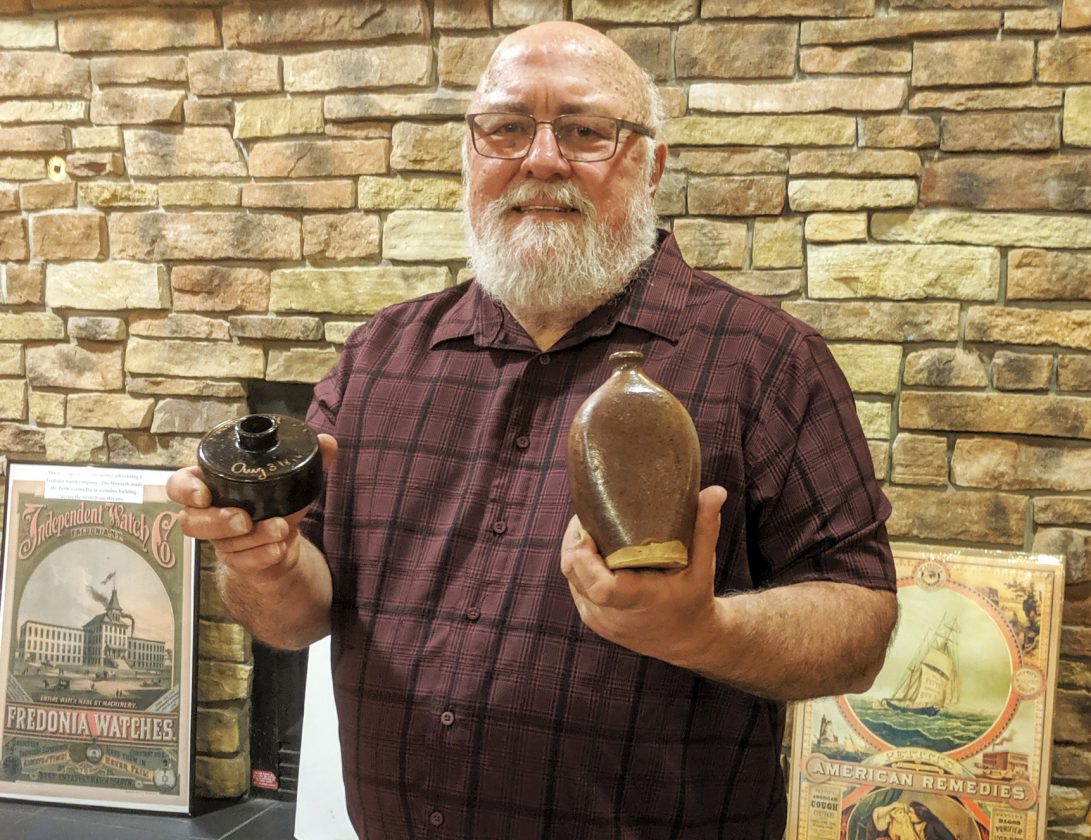 Above left are photos of the Hanover Elm. At right, Vince Martonis is holding the Stearns Lily Dale ink well and the Haven and Kenyon redware flask.

The next two curiosities involved the two great trees from Hanover — the Hanover Elm and the Great Black Walnut Tree of Silver Creek. The elm, which blew down in 1934, was 35 1/2 feet in circumference and 425 years old. A section of it with 33 historical oil paintings on it done by Seneca artist Sanford Plummer is in the Hanover Town Hall. The walnut, which blew down in 1825, was so large that it was hollowed out, made into a room, and attached to a Silver Creek store as an annex. Tea parties were held inside the tree. It eventually made its way to New York City, Philadelphia, and London, England, where it later burned in a museum fire.

The final curiosity related to Dr. James Pettit who made and sold Pettit’s medicines beginning in the 1830s in Fredonia; later his son Eber ran the business. Both were also agents on the Underground Rail Road. The medicine business was later purchased by the four Howard brothers of Fredonia who also owned the Independent Watch Company. Watches were sold to a man named Sears who soon successfully partnered with a man named Roebuck. Mark Twain was an investor in the watch company. Martonis displayed examples of the medicines, an 1880’s color poster advertising various Pettit medicines, and an 1885 color poster of the watch factory.

Attendees were presented with their choice of a free elm or walnut tree colored post card that Martonis made to give out at his talks. 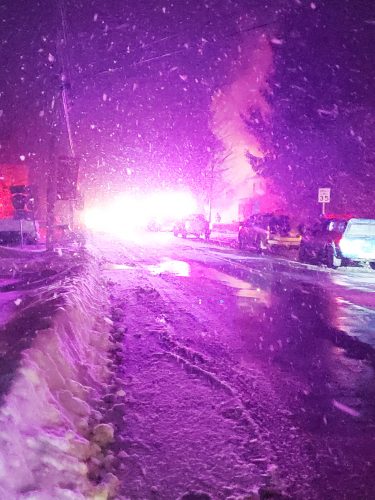 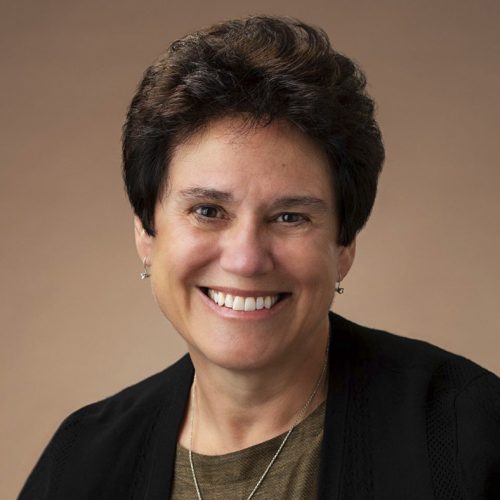 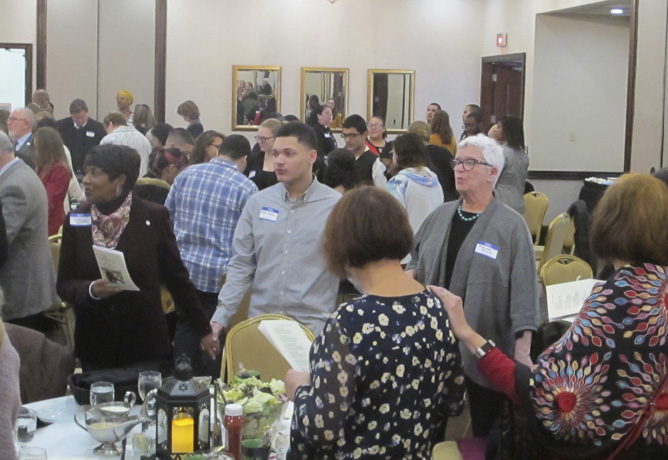 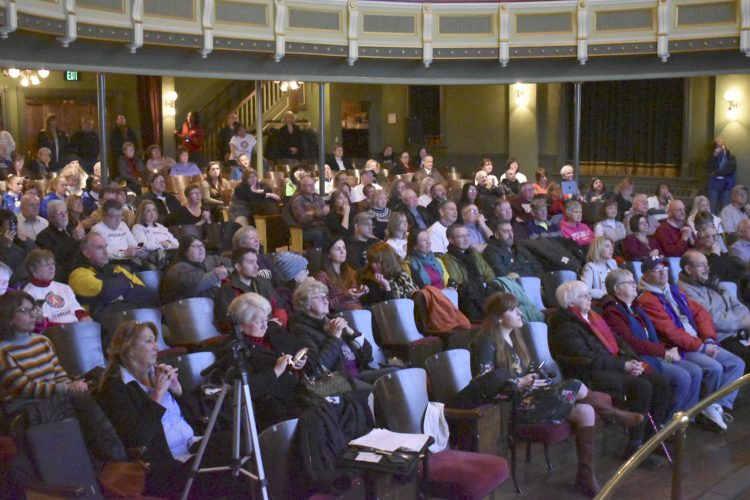