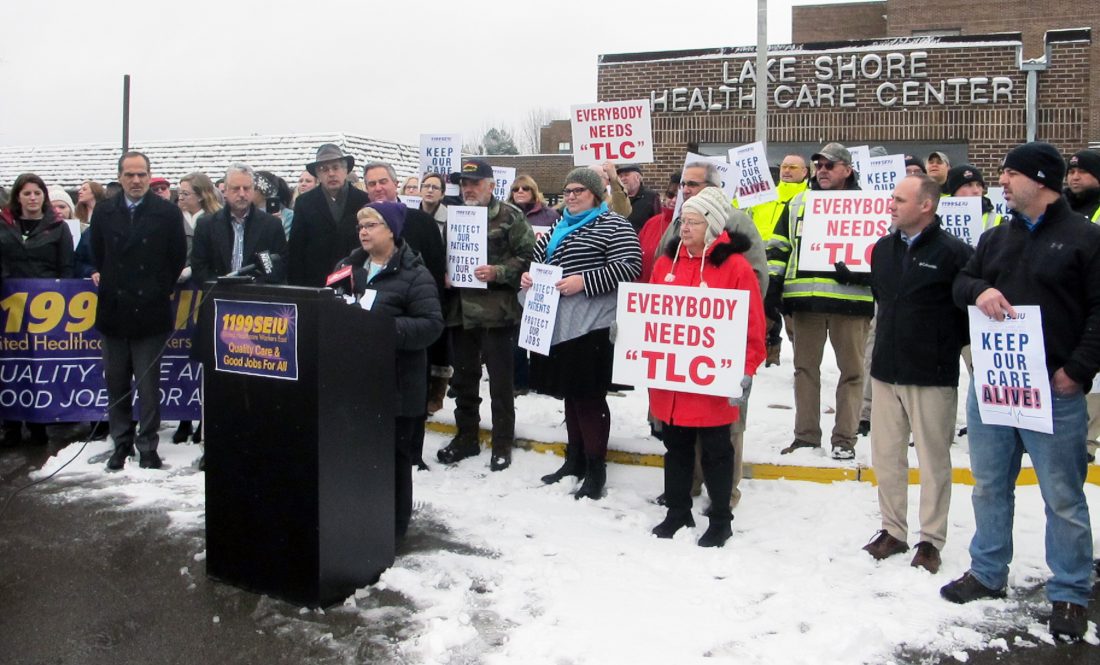 Kathy Manning, a 46-year registered nurse in the chemical dependency unit at Lakeshore TLC Hospital, took the podium at Tuesday’s rally and said that she and other staff received no notification of the hospital’s announced closure prior to Dec. 3. OBSERVER Photo by Mary Heyl.

IRVING — State Sen. George Borrello and Assemblyman Andrew Goodell will be on hand Friday afternoon for a press conference that calls on the Brooks-TLC Hospital System board of directors to put a halt to closure plans at the Irving facility.

Their call may be coming too late.

As of Thursday morning, all patients have been relocated to other facilities from the Lakeshore Hospital behavioral health clinic. In addition, supplies and equipment at the location are being moved out of the building.

The committee decided that given the region’s need for mental health services and the hospital’s lack of a transition plan, the facility should remain open until further notice.

However, despite the office TLC/Lakeshore’s request to close, hospital administration has continued pushing ahead with closure plans by manufacturing staffing shortages and deliberately misleading the remaining employees.

Almost in an apparent retaliation after the order, Brooks-TLC officials continue to take supplies and equipment from the Irving facility. Some of the items are reportedly even being disposed of into dumpsters. Even this week — after the council ruling — Brooks employees continued to move essential items out of the Lakeshore location.

“It’s very hard to tell a patient who presents in a mental health crisis, that we can’t admit them even though there are beds available,” said Steven Spears, a mental health counselor on the behavioral health unit. “As a healthcare worker, I am here to advocate for my patients who are in need of immediate care. This is devastating to our community.”

The state officials will be joined by TLC/Lakeshore health-care workers who are members of the Service Employees International Union 1199 and other community leaders to raise awareness of the hospital’s outright defiance of the OMH directive and urge the administration to cease its closure efforts, for the good of the region and its employees.

“We invite all community members, staff members, EMS/fire agencies and law enforcement to join us,” a union spokeswoman said.

Brooks-TLC announced the Lakeshore campus closure in early December. That was approved by the state Health Department, but not the Office of Mental Health.