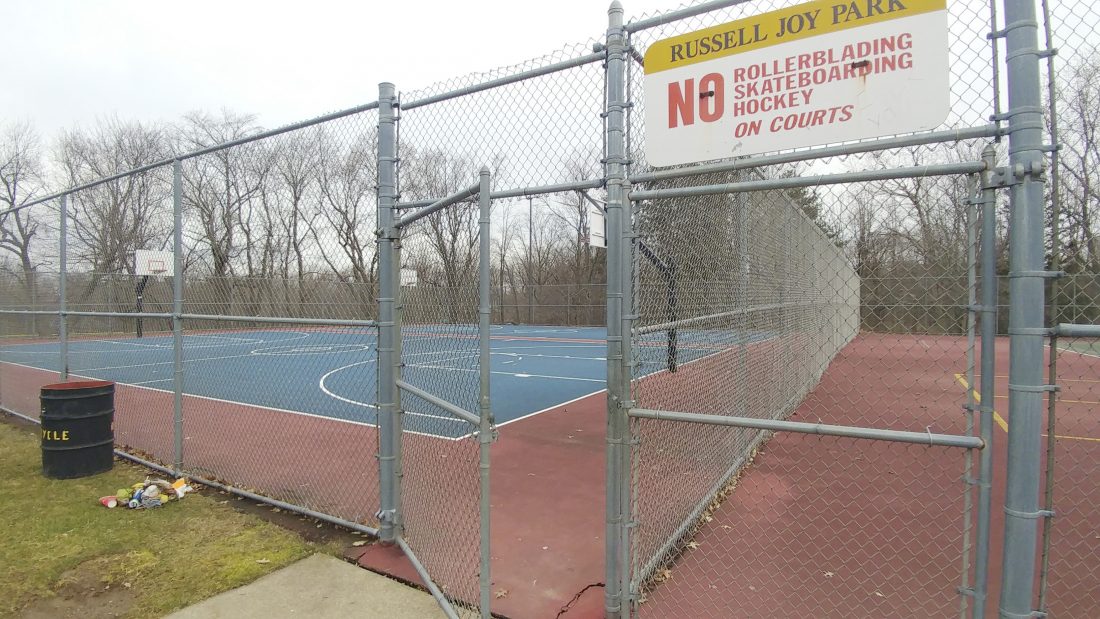 OBSERVER Photo by M.J. Stafford The basketball and tennis/pickleball courts at Russell Joy Park in Fredonia were unlocked earlier this month after Fredonia Trustee Roger Pacos criticized the village’s prior practice of keeping the courts locked until the park officially opens for the spring on May 1. On Sunday, however, the locks were back, likely because of the coronavirus.

It was a short season for the basketball and tennis courts at Russell Joy Park in Fredonia.

At the March 9 village board meeting, Trustee Roger Pacos criticized the practice of keeping the courts locked until the park officially opens May 1. Village employees apparently responded quickly, because the locks were gone and the courts were open and accessible two days later.

Pacos noted that although May 1 is the official opening date, the rest of the park is accessible year-round.

“The ballfield’s used, the playground’s used, I guess you can use the pavilions but nothing’s cleaned for them,” he said. “Water is not (on), bathrooms are not open. But for some reason, even though the field and the playground can be used, we keep the basketball court and the tennis courts locked up.

“A number of years ago, when I was running the rec department, it was a beautiful day early in the spring like this,” he continued. “I was down in the lower pavilion painting over graffiti … and as I was leaving, there was about 20 kids playing on the basketball court. When I looked, I saw that it was locked up, which meant they all climbed over that 10 or 12 foot fence to get into there. Now, I probably could have yelled at them and told them to get out, but instead I unlocked the gate and told them, ‘I don’t want you getting hurt getting out of there,’ and I went back later and locked it.”

“The more people you have in that park, the less problems you have,” Pacos said, adding that Police Chief Phil Maslak and Streets Superintendent Tony Gugino signaled to him that they were fine with unlocking the courts early.

“I don’t even know why we lock it in the first place,” Pacos admitted. “The only reason I’ve ever gotten is that’s how we’ve always done it.”

However, due to the coronavirus, it appears village officials have relocked the tennis and basketball courts. On Sunday, the courts were once again locked.

Gov. Andrew Cuomo has not called for parks to be shut down, however he has called on people to not play basketball or do any type of game activity that requires individuals to be in close contact.