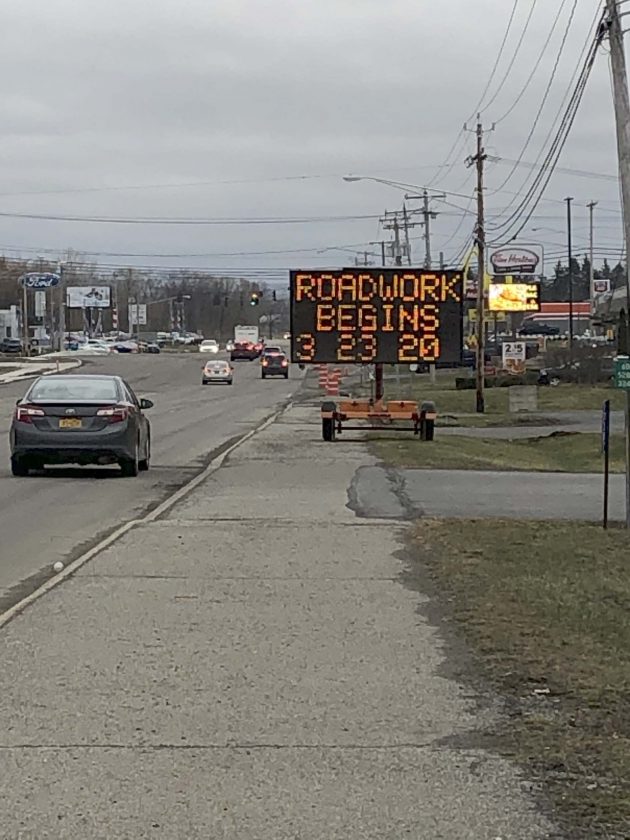 Although many functions of government have been put on hold, road construction is not one of them. Because of that, the state Department of Transportation is returning to work on installing a roundabout at the intersection of Routes 60 and 20 in Fredonia starting today.

Signs have been posted near the intersection stating “Roadwork begins 3-23-20.” In an email to Joseph Morrissey, the director of communications with the state Department of Transportation, he confirmed Friday afternoon the signs are for the roundabout construction.

In Gov. Andrew Cuomo’s announcement Friday on pausing 100 percent of non-essential work, he stated that essential businesses or entities may continue. Cuomo listed 12 exemptions including “Construction, including skilled trades such as electricians, plumbers, or other related construction firms and professionals for essential infrastructure or for emergency repair and safety purposes.”

Morrissey highlighted that exception in his email to the OBSERVER, which he said is why they are permitted to return.

The state Department of Transportation started work on the roundabout in May, 2019 after the state Supreme Court dismissed a lawsuit from Enrico Francani, owner of the nearby McDonald’s over what he alleged would be a loss of business due to the configuration of the roundabout.

During most of the the summer, construction crews moved utility poles and street lights, so the work had little impact on traffic. By the fall, the intersection was torn up, traffic lanes were reconfigured and the stop lights were relocated. By November, the intersection was repaved and the traffic lights were returned. Still, the orange cones remained throughout the winter, reminding drivers that the work would return in the spring.

Original estimates has the work for the roundabout completed this summer with a price tag of around $3.7 million.