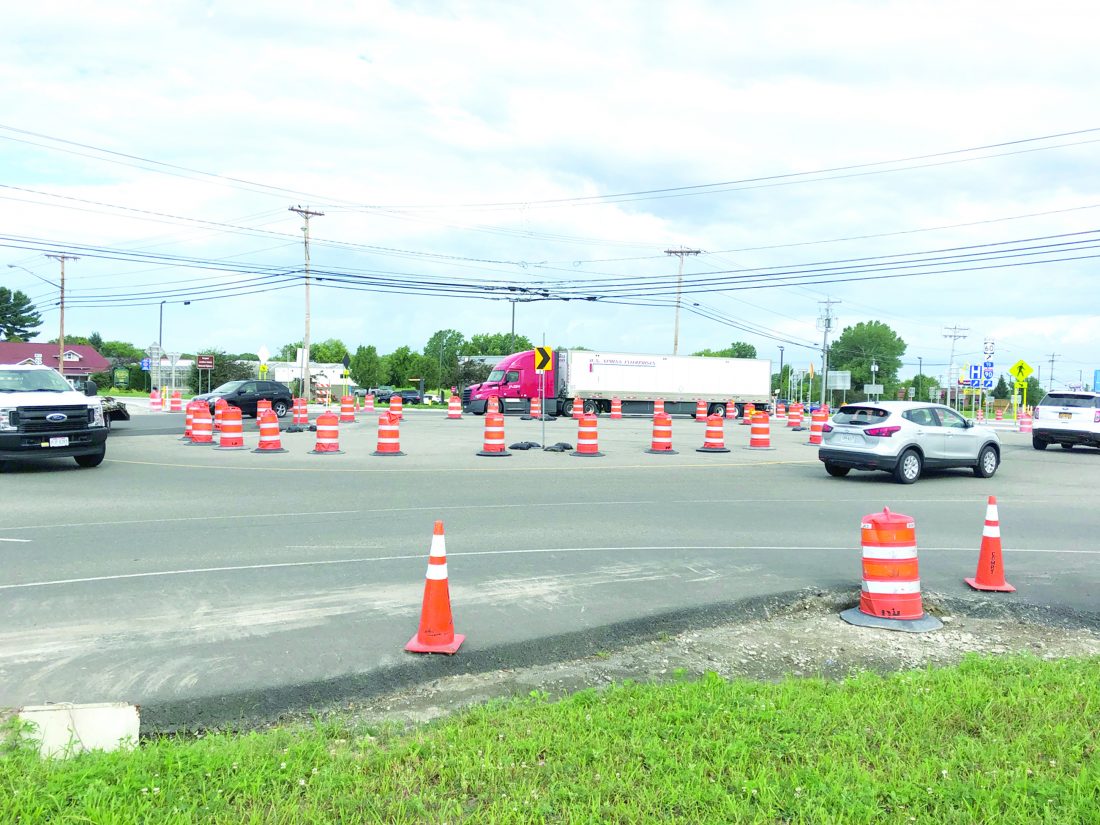 OBSERVER Photo by Gregory Bacon The Fredonia roundabout is not expected to be completed until the fall. The state says changes are needed to address drainage. They are waiting for materials before moving ahead with construction.

Work on the Fredonia roundabout continues to be on hold as the state is seeking materials to revamp the drainage system.

In an email with Joseph Morrissey, the director of communications for the New York State Department of Transportation, he admitted there have been problems during times of heavy rain.

“The roundabout is already fully functional. However, a recent storm revealed the need to redesign certain portions of the drainage system to ensure flooding doesn’t happen in this area in the future,” he said. “We are currently in the process of installing a new drainage structure to better carry storm water from the nearby Fredonia School District campus. That should prevent future occurrences of flooding.”

Because of this change, the project’s completion date will be slightly delayed from its original goal, which was this summer.

“The lead time required to procure the precast drainage structures and pipe will delay the completion of the project to the fall. Work left to do includes construction of the truck apron and center island,” he said.

In order to do the work, Morrissey said the state will need to undo some of the work that had been finished. “Some of the bottom layer pavement will be removed to accommodate the new drainage structures,” he said.

He added that costs have not yet been finalized. The roundabout was originally projected to run $3.7 million. Construction for the roundabout began in May 2019, with public discussions going back to 2014.

On June 23, there were reports the roundabout had briefly flooded during a heavy rain storm. It had self-corrected within minutes.

Construction on the roundabout appears to have been on hold since early July, although Morrissey said the state is still working on it.

“This is still an active construction project. Work continues while we await materials for the new drainage installation system,” he said.

On its website, the state DOT offers the following tips when navigating a roundabout:

¯ as you approach a roundabout, you will see a yellow “roundabout ahead” sign with an advisory speed limit for the roundabout;

¯ slow down as you approach the roundabout, and watch for pedestrians in the crosswalk;

¯ once you see a gap in traffic, enter the circle and proceed to your exit. If there is no traffic in the roundabout, you may enter without yielding; and

¯ look for pedestrians and use your turn signal before you exit, and make sure to stay in your lane as you navigate the roundabout.

This is the first roundabout in Chautauqua County. The closest one is on Routes 5 and 20 just east of the Cattaraugus Creek bridge in Cattaraugus County.