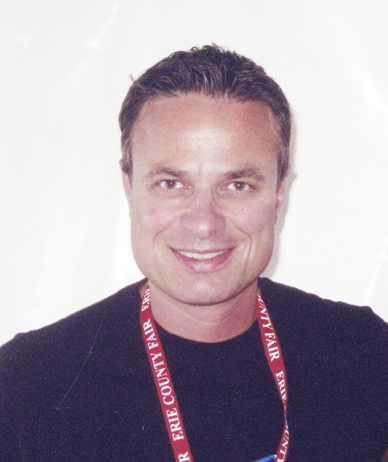 Paul J. Schober, 55, of Dunkirk, New York, died on November 5, 2019, at the Roswell Park Cancer Institute in Buffalo, New York after a gallant

multiple-year battle with cancer. Paul was born on April 28, 1964, the fifth of six sons of the late William J. Schober and Mary Irene (Van Den Vouver) Schober. After the premature deaths of his parents, Paul was raised by his Aunts, Mary J., Teresa, and Frances Schober, who have also predeceased him, along with the assistance of his brothers.

Paul attended Cardinal Mindszenty High School until its closing, and thereafter attended and graduated with honors from Dunkirk High School in 1982, where he was elected Student Council President.

In 1986, he received a Bachelor of Arts Degree in Economics, with a minor in Political Science, from Colgate University, where he was a member of the College Council and Phi Delta Theta.

Paul’s fascinating career was spent as an entertainment and concert promoter, and as a talent buyer for various venues, including Melody Fair Theatre in North Tonawanda, and the world-renowned Chautauqua Institution, in Chautauqua, NY. At the time of his death, and his most rewarding role, Paul was the longtime Director of Entertainment at the Erie County Fair and Exposition, and Fairgrounds Gaming and Entertainment, positions he loved because of the terrific group of people he had the pleasure to work with. In his thirty-year career in entertainment and talent buying, Paul had the opportunity to meet, book, and work with a huge variety of performers and entertainers, across numerous genres. A small list would include Bob Dylan, Ray Charles, Tayor Swift, Carrie Underwood, ZZ Top, Charlie Daniels, Kelly Clarkson, Black Sabbath, Willie Nelson, and Evel Knievel, let alone all the other events

United States Representative for an Entertainment and Performing Arts Tour of the Republic of Ireland and Northern Ireland.

Although his professional work was very important to Paul, and he excelled at it, it was his roles as son, brother, nephew, uncle, great-uncle and friend that he will forever be remembered. Paul was an impresario when it came to connecting with his family, and his friends, and was

more than willing to assume the role of “Master of Ceremonies” at any gathering.

Paul and his incredible grace, wit, generosity, charm and love will be dearly missed by his brothers, William F. (aka Fritz) Schober, John J. (Susan)

to coast, with many of them being friends since his days at School 4, and St. Mary’s in Dunkirk, NY.

He was also predeceased by his Uncle, John G. (Yogi) Fitzgerald, and his cousin, Lynn (Fitzgerald) Riley.

In lieu of flowers, memorials may be made to Northern Chautauqua Catholic School, 336 Washington Avenue, Dunkirk, NY, or a charity of one’s choice.

Paul has left the building.

Thank you and goodnight.