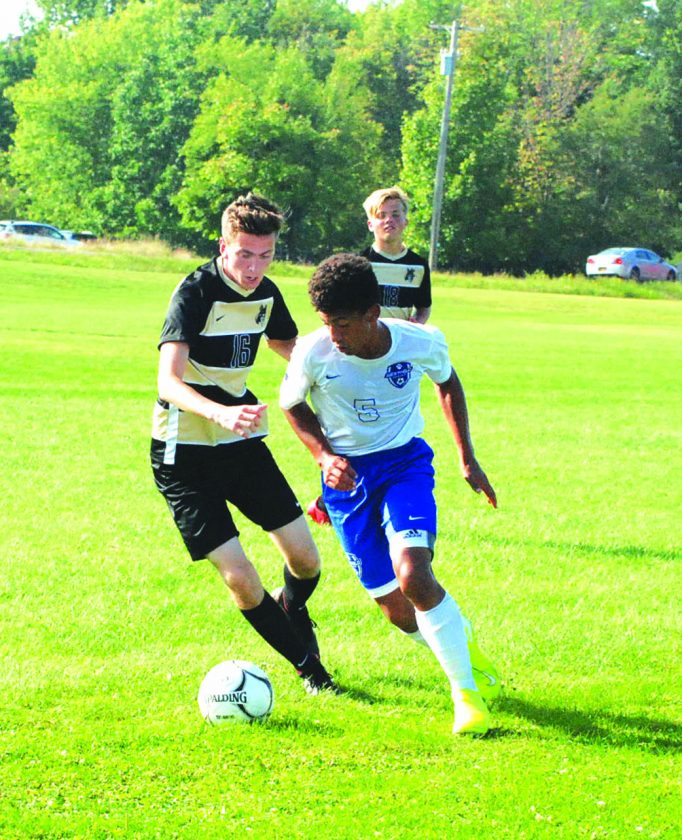 SILVER CREEK — Wednesday’s tilt in Silver Creek may have been the first divisional game of the year for the Westfield/Brocton Wolverines, but it looked like the visiting squad was in mid-season form. Westfield/Brocton topped the Silver Creek/Forestville Black Knights, 7-0, in a Section VI CCAA Division 2 Central boys soccer matchup at Silver Creek High School on Wednesday.

In the opening minute of the game, the Wolverines (5-0, 1-0) began their relentless attack on the Black Knights net. The ball was carried down the left wing by Nathan Culbreth and a hard cross to the middle was knocked down by Silver Creek’s goalkeeper Jeremy Wilcox. Unfortunately for Wilcox, too much pace was put on the ball causing the rebound to go in off the streaking Wolverine forward Jason Almeter, giving Westfield/Brocton an early 1-0 lead.

Not even a minute later, the Wolverines attack got another big chance, as Culbreth sent a cannon from far out into the top right corner, just past the fingertips of the leaping goalkeeper and gave the Wolverines the 2-0 advantage. The assist was credited to Cole Holland.

“We came out explosive today,” stated Westfield/Brocton coach Jared Winder. “Created opportunities early and often. We had a barrage of shots within the first ten minutes. Found the back of the net a couple times within the first couple minutes which really put us off on the right foot.”

The Westfield/Brocton attack did not slow down as the game carried on, but Wilcox started to heat up in net and made sure to keep the Wolverines lead to just two. Wilcox faced an artillery of shots and managed to fight each one off to keep the lead at a minimum. At the end of the evening Wilcox had 23 saves in his strong effort.

“I have a really talented goalkeeper,” Silver Creek/Forestville head coach Mark Bratcher said of Wilcox. “Jeremy is very skilled. He knows what he needs to do. When he does lead the team, it makes a big impact.”

Silver Creek/Forestville managed to hold the Wolverines at bay until the 17th minute when once again the duo of Heim and Culbreth struck. It was Culbreth who scored from Heim giving Westfield/Brocton a 3-0 lead early into the match.

“I think that Westfield/Brocton has a really talented team,” said Bratcher. “It’s a pretty big challenge to come out and start league play against a team like this. They’re well coached, they’ve got a lot of skill… the better team won today.”

Westfield/Brocton continued to pour it on in the first half, but the Black Knights defense looked to have straightened themselves out. Despite their late effort defensively, the Wolverines did manage a fourth goal as Gabe Morello found the back of the net with another assist being credited to Holland.

The Wolverines strong possession game saw them take a 4-0 lead into halftime.

“Defensively, we’ve just been phenomenal this year,” Winder said about his squad. “Our defense is yet to let up a goal in the time of play, other than the PK early in the year in the first five minutes of a game. I can’t speak enough on our sweeper Dylan Scriven. He’s just a lock down defender. He’s returning defensive player of the year from last year, he’s our leader back there. And Mike Johnson, when he needs to make the saves he’s back there… he’s rock solid.”

Early into the second half it didn’t take long for Culbreth to find the back of the net, as Heim connected with him again on a beautiful cross to give him his first hat trick and the 5-0 lead.

“A big key for us is spreading the ball out wide to our wing forwards,” Coach Winder said about his offense. “Then we can work the ball into the middle. We’ve been successful with that so far this year. A lot of our offense is generated through getting it deep, down into the corners and through crossing the ball. It showed today that work we’ve been putting in practice is really proof today that we have been successful with that.”

As the half went on the Wolverines saw more unfamiliar faces get a chance to play. This saw the Black Knights gain some possession, but it was the Wolverines who continued to dominate the scoreboard. In the 57th minute Heim found the back of the net on a nice ball from Darien Swanson to go up 6-0. Then Ethan Weingart scored his first varsity goal late in the half on a nice hustle play finishing off a slow roller from Swanson that beat Wilcox for the eventual 7-0 final.

“Nate Culbreth first varsity hat trick,” Winder mentioned. “He played exceptionally well today, did a great job finishing for us. We had goals from a number of guys today — Ethan Weingart, first varsity goal had some great minutes for us.”