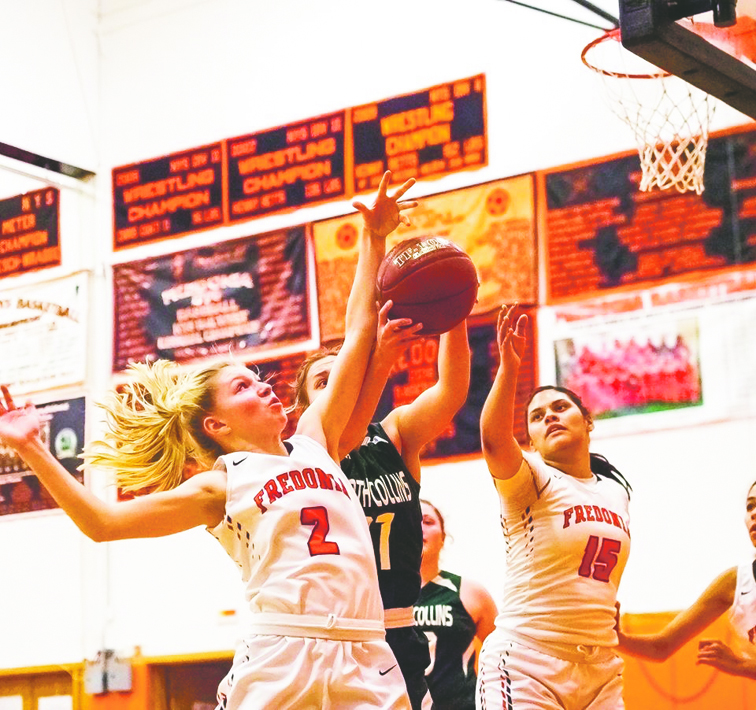 You could tell the Fredonia Lady ‘Billies were ready to come home.

After trailing 8-7 to the North Collins Lady Eagles near the end of the first quarter, the Lady ‘Billies’ defense buckled down. They gave up three points the rest of the game.

After the two minute mark of the first quarter, the Lady ‘Billies outscored the Lady Eagles 52-3 on their way to a 59-11 victory in a non-league girls basketball game on Friday night at Fredonia High School. It was the first home game of the season for Fredonia.

Trailing by one point, the defense — spearheaded by point guard Kazlin Beers — made it so North Collins was barely able to get a shot off. North Collins saw very few opportunities at offensive possessions, as the Lady Billies’ gathered up every loose ball. The few possessions North Collins did have didn’t see a shot touch the rim, due to the active hands and intense pressure from the Lady ‘Billies.

Beers did it all for the Lady ‘Billies on Friday, whether it be getting a steal, driving the lane, or setting up a teammate with a slick pass. At the end of the day, Beers finished with nine points, six rebounds, eight assists and six steals, filling every role Fredonia needed in a total team effort. Friday night was the kind of effort Fredonia coach Dan Vona has been trying to get the girls to work on in his first season as head coach.

“We didn’t have any gaps in the defense. They’re talking, they’re passing through, which is key,” Vona said. “Offensively, we ran a lot of good sets. They moved the ball, they kicked it out. They’re all honor roll students, so they listen pretty well and they were all into it. You can tell when kids are into it and when they’re not, and I know they’re going to keep getting better.”

When the first quarter ended 11-8 in favor of Fredonia, the Lady ‘Billies started, and essentially finished, the second quarter on a 17-1 run, with North Collins not scoring until there was 20 seconds left in the second quarter. Leading the scoring charge in the second frame was Anna Buchanan, who scored eight points in the quarter, while Beers had five of her nine in that quarter. The exclamation point of the second came from a Beers steal, where she volleyed the ball to herself, split two defenders, and then found her other guard, Kelly Gullo, in transition. Beers then received the pass back and found Buchanan cutting to the basket, ending in an and-one layup and a converted free throw for a three-point play. That sequence emphasized everything the Lady Billies did well on the offensive end, as they moved the ball selflessly all night to get the best shot.

“We worked on talking, moving the ball, patience, and getting high percentage shots,” Vona said. “We have some good three point shooters, but it was like there was sulafane on the rim tonight, but they’re taking good shots and they were open.”

Fredonia was able to hold North Collins to a scoreless third quarter, outscoring them 13-0. The quarter featured a lot of Nagely Vazquez, who scored six of the team’s eight points to start the quarter. Like it was all night, the Lady ‘Billies’ defense was tenacious, and more importantly to coach Vona, executed well.

“We worked on our 2-3 zone, talking, passing through, and we did a heck of a job,” Vona said. “It was dominant but we worked on it, it was a good opportunity for us to work on the fundamentals we’ve been going over in practice, and they executed them to perfection, both defensively and offensively.”

The Lady ‘Billies (3-2) were led by Vazquez’s 18 points and 10 rebounds, while Buchanan finished the game with 17 points and five rebounds, to go with Beers’ impressive stat line.

Fredonia is next in action on Thursday, Dec. 19, when they will travel to North Collins for a rematch with the Lady Eagles. Vona said we may be in for a different look.

“I’ll want to work on some defensive schemes and maybe some new offensive sets before next Thursday. We might try and do some new stuff,” Vona said.