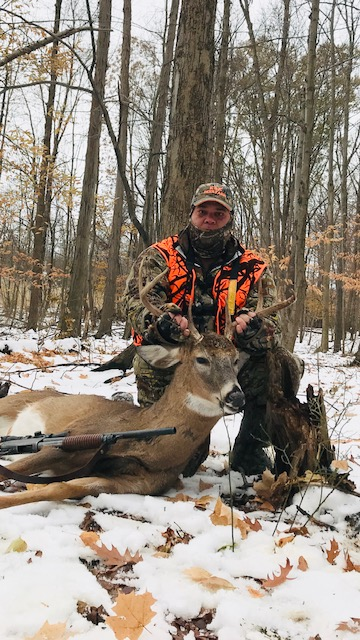 The three busiest days of Deer season are now past and the action has slowed down a little. A gentle snowfall during the weekend will recharge the hunt batteries but it has been a productive season for numerous hunters so far.

Local deer hunter Dan Salerno tagged two nice bucks this year. On the morning of November 4, Dan was in his tree stand and observed several doe shortly after sunrise being followed by a buck. Dan had a good location, but commented that a recent wind storm downed several trees, impacting his shooting lanes. The buck came in one direction that did not afford a shot, but thanks to some well placed scent drippers and a lot of patience, the buck came back on the other side of the stand offering an 18 yard shot for the bow hunter, who was using a Mathews compound bow equipped with a Montec fixed blade broadhead mounted on a carbon arrow, complete with illuminoc nock. The hi-vis nock easily allowed the hunter to visually track the arrow’s flight.

After a half hour, Dan descended and located his arrow, confident that the shot was lethal. Dan opted to wait a little longer and with his brother Jeff, the pair soon located the downed deer about 80 yards away. The 146 pound 8-point was processed at Stevens Brothers in Panama and Westwind Taxidermy will do a European mount.

Once firearms season opened, Dan returned to the same spot on Monday Novem 18. Several does cruised by before sun up and around 8 a.m. Dan spied a familiar deer browsing on acorns at 125 yards. The buck then ducked back into the woods and Dan thought that was it. But fortune favored the hunter and the buck came back. Quartering through the thickets, the buck stayed at the limit of the hunters comfort zone for his 12 gauge Ithaca model 37 shotgun. Tracking him with the scope, Dan mouthed a doe bleat and stopped the buck. Dan squeezed off a shot, sending a Federal Super X slug on it’s mission and the buck dropped in it’s tracks. A second slug was chambered, but the deer stayed down, confirmed by the hunters binoculars. After unloading and lowering his gun, the hunter cautiously approached the 8-point and found he had effectively delivered a double lung hit. After decades of deer hunting this was the first deer Dan did not have to track. The 8-point rack was 20 inches wide and was processed at Lighthouse Grocery in Mayville. Dan noted that this buck was also seen during bow season in the same area. Congratulations! 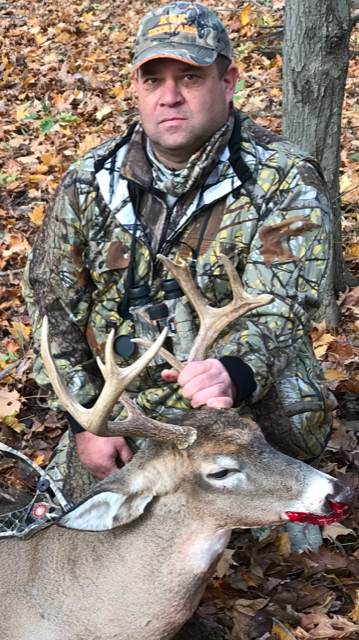 The Eastern Lake Erie Charter Boat Association will be having a meeting at 7 p.m. at the Northern Chautauqua Conservation Club on Friday December 06. Open to the public. Time is running out. The Northern Chautauqua Conservation Club will once again be hosting a Hunters helping the Hungry Program. Members of the “Con Club” are asked to bring non-perishable food items to the club on Tuesdays during the hunting season. All food and monetary donations will then be turned over to our local charities for distribution to the needy prior to Christmas. Help make someone’s holiday a little happier. Put a few cans of food in your vehicle today , so you will be ready to help do your part.

Our local chapter of the National Wild Turkey Federation will be meeting on Monday December 09 at 7 p.m. at Liberty Vineyards located in Sheridan on Route 20. Agenda will include finalizing plans for the membership/fundraiser banquet to be held in January at the Koscuisko Club in Dunkirk. The meeting is open to the public.

The Western New York Safari Club Will host their 25th annual game dinner on Friday, Dec. 13 at Michael’s Banquet Facility located at 4885 Southwestern Boulevard, Hamburg. The doors open at 5 p.m. with dinner at 7 p.m. There is a $45 donation. For information call Terry at 472-2380.

Duck Season in our area (Western Zone) is a split season, re-opening Nov. 30 until Jan. 5. Canada Goose season for our area, which is considered the South, is from Oct. 26 to Jan. 13, with a daily bag limit of five geese per day.

Upcoming gun shows include: Dec. 14-15 at the Harbor Creek Fire Dept Social Hall located at 7275 Buffalo Road – US Route 20 (located between North East, PA and Harborcreek, PA. Shows are from 9 a.m.- 4 p.m. on Saturdays and 9 a.m. to 3 p.m. on Sundays. Adults are $5 and children under the age of 12 are free. For more information contact Larry Spicer at (716) 792-9972 or go to LRgunshows@gmail.com or website LRsportingevents.com.

On Jan. 4, 2020, the Lakewood Rod & Gun Club will be sponsoring free fly tying classes for youths and adults. Theses courses will be absolutely FREE. All materials and equipment will be provided. These FREE classes will continue for the next three Saturdays at the Lakewood Club from 9 a.m. until noon. Free pizzas and beverages will also be provided. Instruction will be provided by the mentors from Kids On the Fly. You are invited. 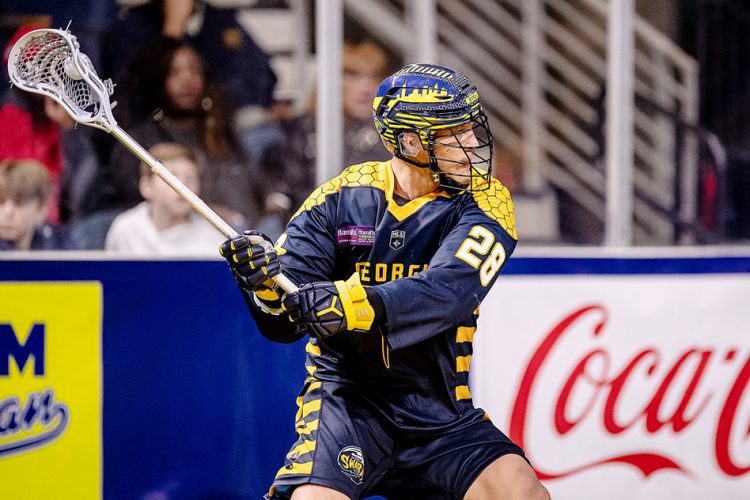