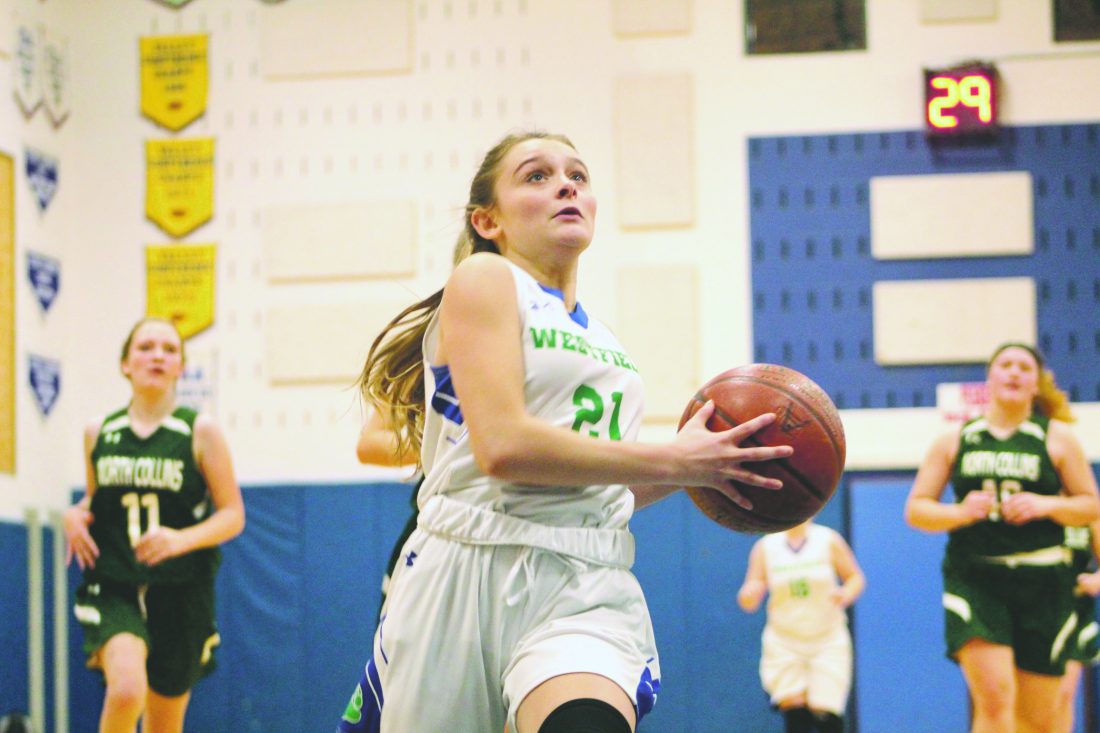 Westfield/Brocton’s Bianca Seger goes up for a layup during Monday’s non-league girls basketball game against North Collins at Westfield Academy. Seger’s career-high 10 points off the bench helped guide the Lady Wolverines to their fifth win of the season, 60-31, on Monday. OBSERVER Photo by Braden Carmen.

WESTFIELD — In the middle of a tough season so far, with a challenging league schedule remaining and two league games left this week, the Westfield/Brocton Lady Wolverines were in need of a spark to carry themselves through the rest of the season. Monday night, that spark came when Westfield/Brocton hosted the North Collins Lady Eagles.

The Lady Wolverines jumped out to an early lead and never looked back, as Westfield/Brocton ran past North Collins, 60-31, in a non-league girls basketball contest on Monday night at Westfield Academy.

“This win was really huge. We needed it,” said Westfield/Brocton coach Dave Mathews after the game.

Westfield/Brocton (5-9) came out on a 9-2 run to start the game, where five different players were responsible for posting points on the board for the Lady Wolverines. That trend continued throughout the night, as Westfield/Brocton had six different scorers in the first quarter, eight different scorers in the first half, and by the final buzzer, all nine Lady Wolverines who were active for Monday’s game found their names in the score sheet. 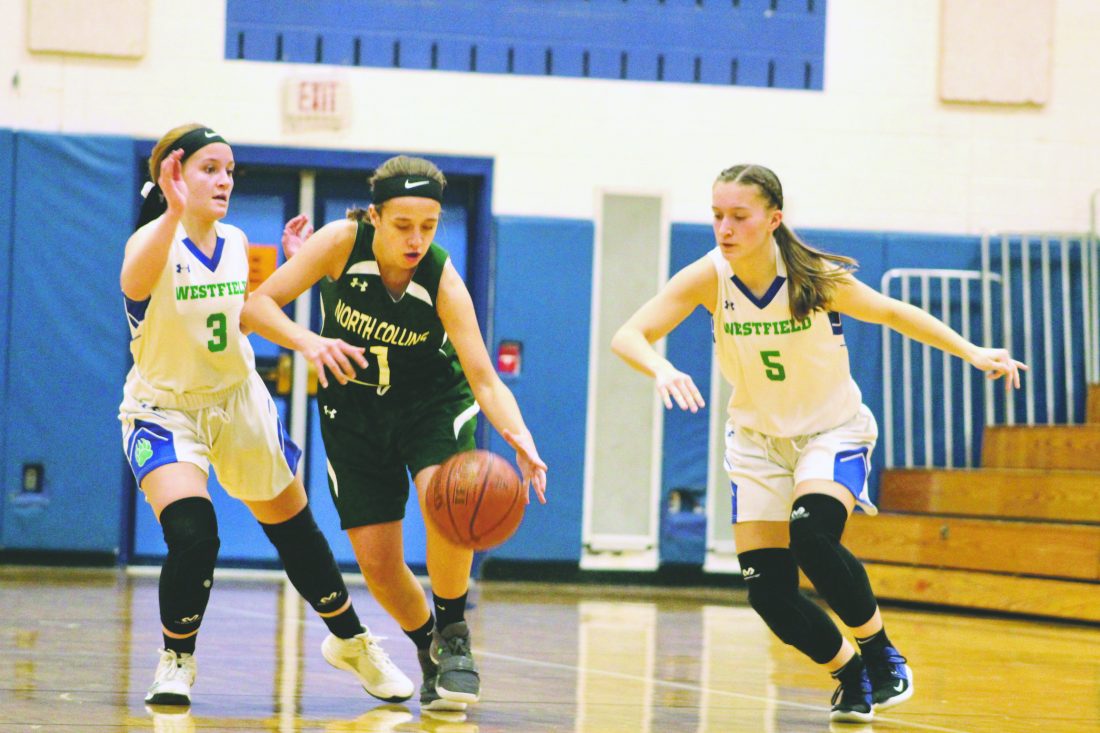 Another key to the Lady Wolverines’ quick start was the team’s defensive pressure.

“They did just what they did against us at our place. They changed defenses … and we struggled going against that,” said North Collins coach Vince Fininzio. “The end result was a 9-2 run and we gave them some easy baskets, but they shot the ball well too.”

“[Our fast start] was huge for us,” said Mathews. “It had a lot to do with them shooting so well the rest of the game. It gave our girls confidence. … We’ve played from behind a lot, so playing out in front really loosened us all up.”

North Collins (1-9) hung around as best it could in the second quarter, as Michaela Rice scored eight of her game-high 14 points in the period. The Lady Eagles just weren’t able to overcome the pressure forced by the Lady Wolverines all night long. North Collins’ highest scoring quarter was the second quarter, with 10 points, where Westfield/Brocton scored 12 points or more in every frame.

“She [Mortimer] asked me ‘What do I do to score more?’ … I told her to just be ready to shoot it — and sure enough, bang,” said Mathews.

The Lady Wolverines closed out the game with a 15-9 fourth quarter advantage, with a pair of buckets apiece from Mackenzie Wolfe and sophomore Bianca Seger.

Conklin and Seger led the Lady Wolverines with 10 points apiece on Monday, while Laura Johnston and Juli Smith each added eight points. As a bench player in her first season on varsity, Seger’s 10 points were a career high.

“Bianca [Seger], especially, was huge for us. She’s fast and when she gets out, she makes the layup,” said Mathews. “To see her finish at the basket was great, but she really concentrates on her jump shot too. She’s got a nice shot — it looks kind of different, but it works.”

Among the nine different scorers for Westfield/Brocton, eight of the nine players surpassed their scoring average for the season, with only leading-scorer Katie Bodenmiller falling shy of her 8.4 points-per-game average on the season coming in, and that was only because she spent a good portion of the night running the offense to get other players involved.

Westfield/Brocton hosts Frewsburg tonight in a big CCAA West 2 Division game at Brocton High School. After a few tough losses this season in league play, tonight will be a big test for the Lady Wolverines.

“Our game against Clymer was hard for us. … Our game against Cassadaga Valley, we played them tough but just didn’t get a win,” said Mathews. “[Frewsburg] is a real big test for us. We really have to play well and handle the ball. … It helps a lot to have this win.”

“There are always bright spots in a loss,” said Fininzio. “I thought we rebounded better than we have in the past. … We’ve been competitive in all our league games so far, and we have a chance to start towards our goal of winning four league games on Friday. That’s what matters most going towards the playoffs.”

Westfield/Brocton’s Bianca Seger goes up for a layup during Monday’s non-league girls basketball game against North Collins at Westfield Academy. Seger’s career-high 10 points off the bench helped guide the Lady Wolverines to their fifth win of the season, 60-31, on Monday. OBSERVER Photo by Braden Carmen.