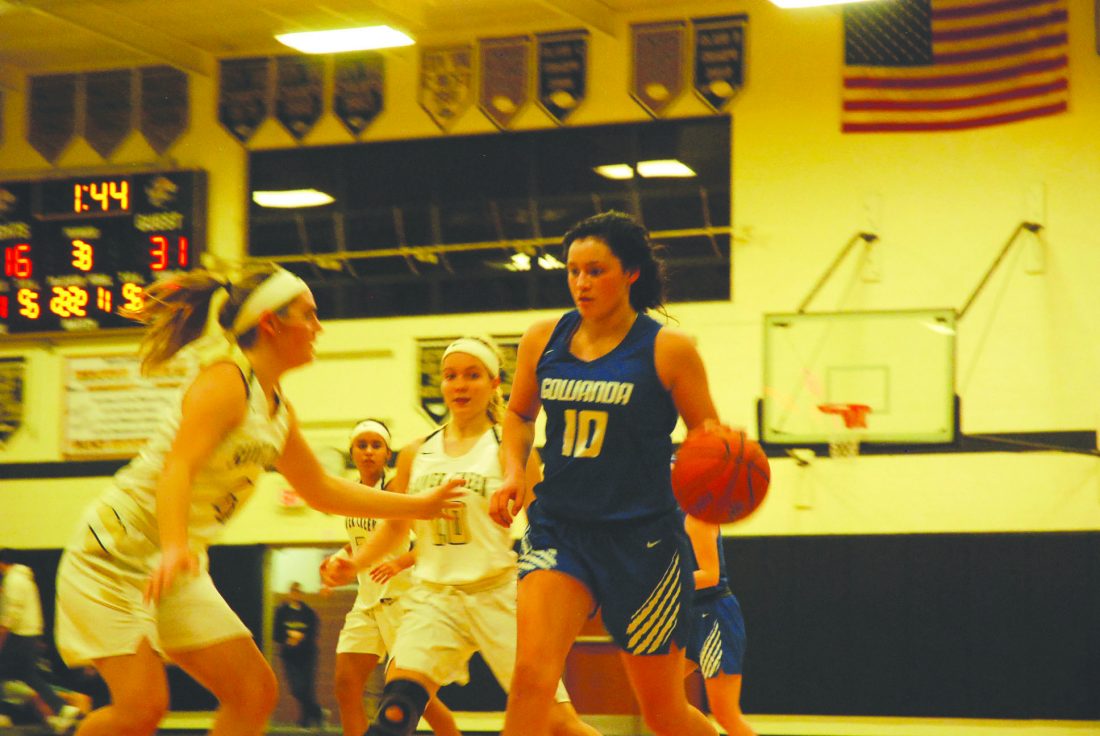 SILVER CREEK — Headed into Monday’s Section VI CCAA Division 1 East girls basketball game between Silver Creek (7-4, 0-3) and Gowanda (3-7, 1-2) one thing was for certain, one team was going to snap its losing streak with its first league win of the season. After four quarters of great defensive basketball, the Gowanda Lady Panthers snapped their six game losing streak by defeating the Silver Creek Black Knights 50-38.

“It was a very competitive game and we knew it would be,” stated Gowanda head coach Ross John. “I’m glad that we came out on top, especially in an away game down here in Silver Creek. I think our girls are growing all the time.”

The Lady Panthers gameplan was evident early, on the first possession of the game star junior Miya Scanlan drained a 3-pointer and established a 3-0 lead. Abby Rice responded for the Black Knights with a layup to make it 3-2, but that was all the scoring for the first couple minutes of the game as both teams struggled to hit shots.

Gowanda’s Miya Scanlan soon started to show why she is a Division 1 athlete. Miya was the floor general for the Panthers, directing traffic and demanded double teams that allowed her teammates to get open. Aside from a Paige Gable free throw, Miya had her hand in on every basket for Gowanda in the first quarter, whether she assisted it or scored herself.

“I consider Miya probably the best player around,” stated Coach John. “I don’t care what size school you’re at, she’s got it. She is definitely a Division 1 athlete… she wants to do it in lacrosse, but she definitely could do it in basketball.”

Despite inconsistent shooting from Silver Creek in the first quarter, the Black Knights only trailed 10-8 headed into the second quarter. Silver Creek immediately tied the game at 10-10 off a Chloe Barrett shot to start the quarter.

The tie did not last for long as Gable was shortly sent to the free throw line and converted both shots for the 12-10 lead that Gowanda would not surrender the rest of the night. Cece Young hit a big 3-pointer and Gowanda received baskets from Miya and Crissa Scanlan, Gable and Nicole Whalen to get a double-digit lead by halftime, 21-11.

Gowanda knew that if they wanted to get the big win on the road that they would need to come out strong in the second half on build on the lead.

Miya picked up right where she left off in the first half, on fire. Miya hit the first two buckets of the quarter for Gowanda, then assisted Young on a deep 2-pointer and before you knew it Gowanda led 31-16.

On the defensive side of the ball, Miya took two early fouls in the quarter that put her at three total with a lot of game to play.

With Miya in foul trouble, the Black Knights started to hit some more of their shots as the momentum began to sway and by the end of the third quarter Silver Creek trailed 33-19.

The fourth quarter saw Gowanda’s Miya Scanlan and Cece Young hit more big shots to get up 41-25, but the remainder of the Panthers started to slow down as the game wore on. Within two minutes, the 16 point lead had evaporated and Silver Creek just trailed by five, 43-38.

“We played with intensity in the fourth quarter, but by then it was too late,” stated Coach Rice.

With the score so close, Gowanda’s gameplan was to get the ball to its best player, Miya Scanlan. Everytime the Lady Panthers inbounded the ball it was quickly given to Miya who either dribbled out the clock or was sent to the foul line. After a handful of free throws the Lady Panthers found themselves up 50-38, and with that score and too little time left the Lady Panthers snapped a six game losing streak and secured their first league win of the year.

Gowanda was led by Scanlan’s 21 points, while Young had 12. Silver Creek was led by Rice’s 14 points and eight rebounds, while Brennan had 10 points.

Silver Creek will have to wait until Thursday to try and get back into the win column as they host Dani Haskell and the Franklinville Lady Panthers.

Gowanda will look to string together consecutive wins on Thursday when they host Portville.