Brown, Bahgat both break their school records at State Qualifier 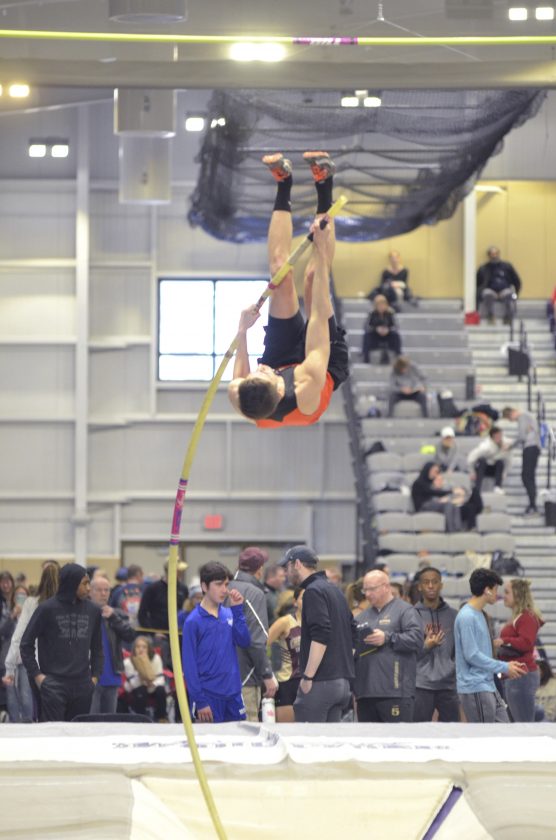 HOUGHTON – It was a banner day at the Section VI championship meet at Houghton College for the Fredonia High School varsity boys and girls track & field teams as Hessen Bahgat, Oliver Madariaga, and Emily Brown broke their own school records to help them qualify for the the New York State Championships at Staten Island on March 7.

Bahgat did not enter the pole vault event until the bar was set at 11’9″ and struggled missing his first two attempts.

He finally cleared the bar on his last attempt and regained his confidence.

“It was a combination of nerves and changing his approach that had Hessen out of sync once he entered the competition,” noted Fredonia coach Mark Benton. “Once he sailed over the bar at 12′ and 12’6” that qualified him for the New York State meet, he became more relaxed and went to work.”

Bahgat broke his own school record when he vaulted 13” 9″ on his first try before falling short during all three attempts at 14′. Orchard Park’s Kegan Mancabelli won the event with a personal best vault of 14′ 3″.

In the 300 meter dash, Madariaga entered the competition ranked sixth but reached the finals with a close second place finish in the semifinal race that broke his own school record. He needed to finish at least in the top three during the finals against very stiff competition in order to qualify for the State meet.

“I told Oliver that he needed to go out as fast as he could and try to hold that pace as long as he could” he coach recounted. “He ran a perfect race and surprised several of his competitors.”

Fredonia also had solid performances turned in by Rian Budzinski and Andrew Camp who each recorded a personal best in the long jump while Kyle Mikula placed 11th in the shot put.

“It was a great meet for our qualifiers,” said Fredonia girls coach Tom Stokes. “Several kids performed really well. I am thankful not just for the great performances, but more importantly, for the great kids we get to work with at Fredonia.”