File photo Fredonia basketball coach Dave Polechetti guided the Hillbillies to a 20-7 record during the 1993-94 season.

File photo The Fredonia boys basketball team poses for a photo during its 1994 postseason run. 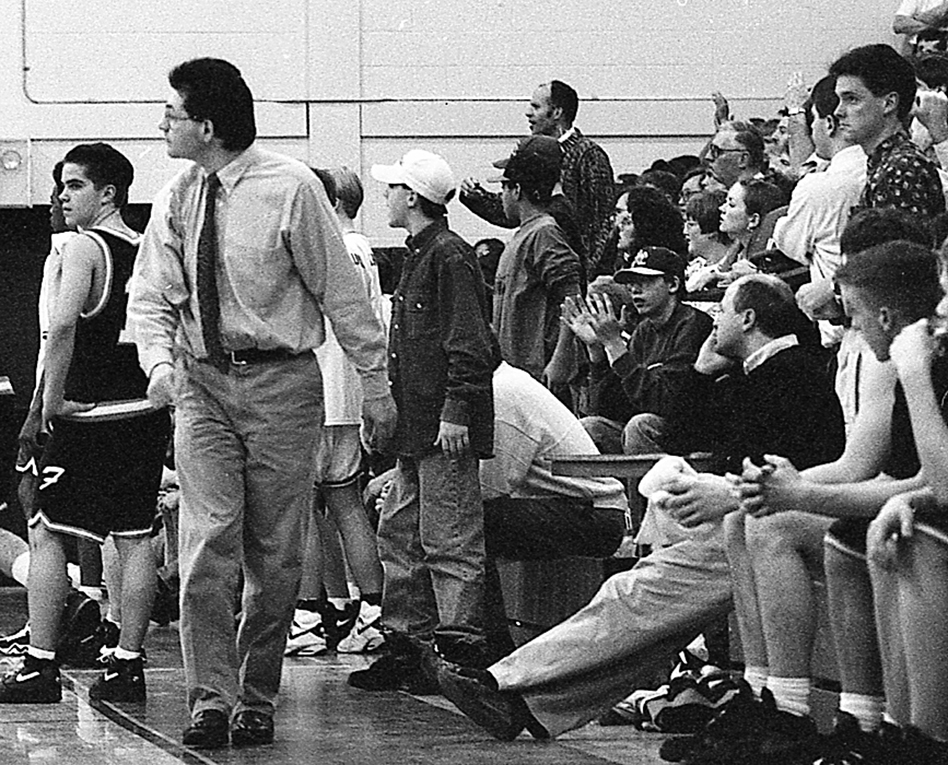 File photo Fredonia basketball coach Dave Polechetti guided the Hillbillies to a 20-7 record during the 1993-94 season.

EDITOR’S NOTE: The following is the first installment of a “Remember When?” series on Fredonia Central School’s run to the New York State Public High School Athletic Association Class B boys basketball Final Four in 1994. Today’s story — the first of four — is from the Hillbillies’ Section VI Class B-2 championship game victory over Lackawanna.

NIAGARA FALLS — The Fredonia Hillbillies didn’t have their “horse” down the stretch Saturday afternoon.

They still won by a nose at the wire.

Playing without star Mike Heary for nearly the final five minutes — he fouled out after receiving a technical foul with 4:47 remaining — the second-seeded Hillbillies, who trailed by 10 points when he left, refused to lose. 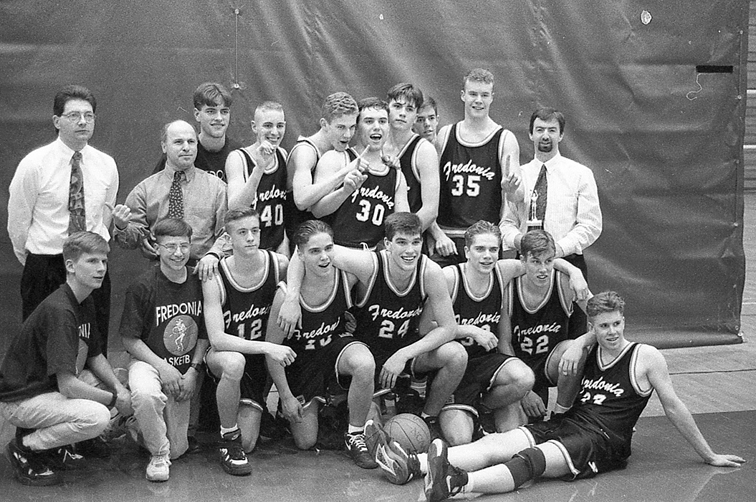 File photo The Fredonia boys basketball team poses for a photo during its 1994 postseason run.

In fact, seniors Mike Haight, Ryan LaMattina and Chris Kubacki were determined not to let their careers end as they rallied the Hillbillies (18-6), with the help of three underclassmen, for a dramatic, 74-71, upset victory over No. 1 Lackawanna (18-4) in the section VI Class B-2 championship game at the Niagara Falls Convention Center.

“All year long, we had a saying that, ‘We’re going to ride the horse,’ but tonight the horse wasn’t in there for us, so everybody else had to pick it up,” junior point guard Mike Spaac said.

And they rode all the way to their second sectional championship in three years as Haight sealed the victory with a go-ahead layup and a free throw in the final 37 seconds.

“It didn’t look good, but we did not lose hope at that point in time,” Fredonia coach Dave Polechetti said after Heary’s exit. “As my father always said, ‘There’ always hope.’ Our kids just proved that. They reached down deep.”

They had no choice.

Trailing 61-51 with just under five minutes remaining, Heary, who had scored 23 points to that point, and the Steelers’ Warren Miles were involved in a verbal exchange after the latter fouled the Hillbillies’ Brian Mierzwa near the Fredonia basket.

Heary was assessed a technical foul, which counted as his fifth personal foul, and he was forced to the bench. Miles, meanwhile, was hit with a double technical and ejected from the game.

Mierzwa hit both free throws and Lackawanna’s Jamie Sylvers connected on both of his technical foul shots, keeping the margin at 10.

“We knew that with Mike out we didn’t have as good a chance, but we got together at mid-court and said, ‘Let’s show these people what our team is made of,'” LaMattina said.

The word “heart” comes to mind.

The game was on.

Lackawanna bounced back with the next four points to lead, 67-61, but Haight hit a trey and three free throws, sandwiched around Joe Milkowski’s field goal, and the Hillbillies were back to within two, 69-67, at the 2:14 mark.

Then Mierzwa came up big with two huge plays.

First, Rybij knocked the ball loose from a Lackawanna player, Chris Kubacki got it to Mierzwa and the sophomore laid it in to tie the score, 69-69.

O’tes Alston, who finished with 16 points, put the Steelers back in front with a rebound of a missed shot, but Mierzwa tied the game again, 71-71, when he snatched the ball away from a Lackawanna player on a rebound and scored.

“I think some of the younger kids just feed off the seniors’ desire to want to win a sectional,” Mierzwa said. “They didn’t want to go out with a loss.”

Polechetti called a timeout to set up the go-ahead basket.

“We had a play set up for Mike Haight to take a ‘three’ and I got the ball from Billy (Rybij) at the top of the key,” Spacc explained. “I penetrated and I saw Mike open underneath and I thought I had to give him the ball for two because two was as good as three in that situation.”

Haight’s layup gave Fredonia a 73-71 lead and the senior, who finished with a game-high 25 points, wasn’t through. He knocked the ball loose on the Steelers’ ensuing possession and a jump ball was called, giving the Hillbillies the ball with 26 seconds left. Haight was eventually fouled and he hit the front end of the 1-and-1 with 16 seconds left to put Fredonia in front, 74-71.

Sylvers, who led the Steelers’ with 18 points, drove the length of the floor after Haight’s missed free throw and put up a trey with five seconds remaining, but it was off the mark. When Sylvers knocked the ball out of bounds trying to get his own rebound, the Hillbillies’ victory was secure.

“We’re just a bunch of scrappers,” Kubacki said of the Heary-less group that finished the game. “We don’t have top ability, but we’ll work hard to get the job done.”

Besides Haight’s 25 points and Heary’s 23, LaMattina had 14 including 10 of 10 from the foul line, Mierzwa had 6 — all in the fourth quarter — and Spacc had 4 points and four assists.

“Mike Heary was the first one to say it,” Polechetti recalled. “He said, ‘We’ve got to prove we’re not (just Mike Heary).’ And, sure enough, those kids did it.”

For Fredonia, the victory avenged a 73-56 loss to the Steelers in last year’s title game and vaulted it into the overall Class B championship game at 6 p.m. Tuesday against Niagara Falls, a 70-67 winner over depew in the B-1 final, at Alumni Arena.

“I get another chance,” Heary said.

His teammates saw to that.

NOTES: The Hillbillies led by as many as 4 points in the first half, but shot just 2 of 11 in the second quarter and trailed, 35-28, at halftime. They cut the deficit to 50-45 after three quarters, but the Steelers’ 9-2 run early in the fourth quarter ballooned their lead to as many as 12. … Heary on the technical foul: “Warren Miles bumped me and I started walking away. He came after me and I walked away and he kept coming at me. I don’t back down from anybody. I’m not going to let them think they’ve got the upper hand. I didn’t say anything to him.”