Suhr incredible and inspiring at 2012 Olympics

Photo courtesy of the Chautauqua Sports Hall of Fame In this September 2012 file photo, Fredonia native Jenn Suhr signs a poster during a celebration in her hometown of her gold medal-winning performance in the pole vault at the Summer Olympic Games in London.

Photo courtesy of the Chautauqua Sports Hall of Fame In this September 2012 file photo, supporters of Jenn Suhr turn out in Fredonia six weeks after she claimed a gold medal. 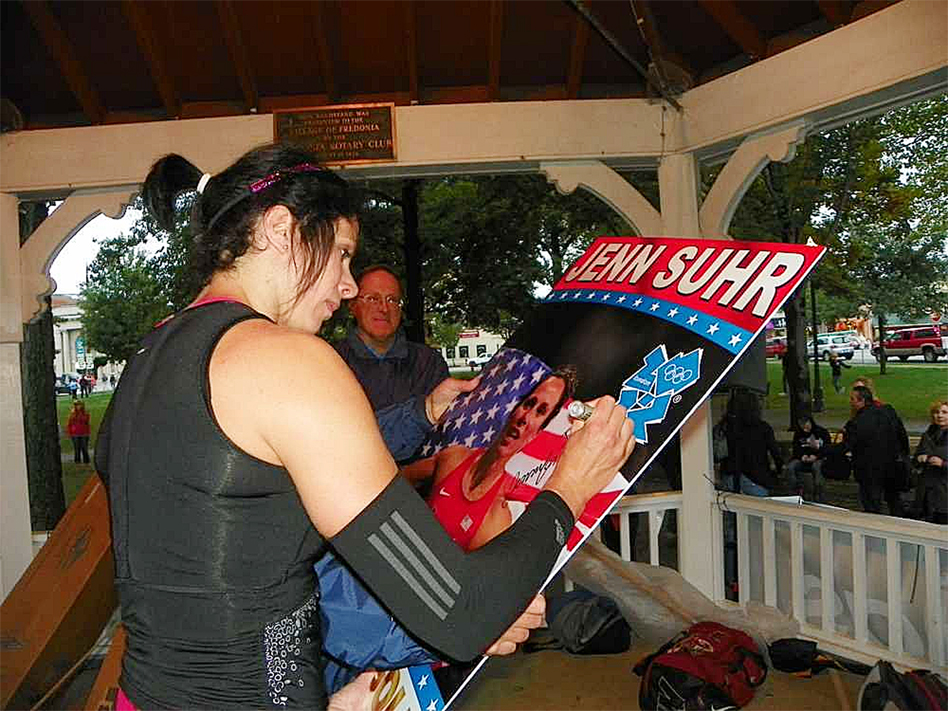 Photo courtesy of the Chautauqua Sports Hall of Fame In this September 2012 file photo, Fredonia native Jenn Suhr signs a poster during a celebration in her hometown of her gold medal-winning performance in the pole vault at the Summer Olympic Games in London.

EDITOR’S NOTE: The following article first saw the light of day on Aug. 7, 2012 in the immediate aftermath of Jenn Suhr’s gold medal-winning performance in the pole vault at the Summer Olympic Games in London. This story is the latest in our “Remember When” series.

Not quite four years ago, Fredonia native Jenn Suhr returned to her high school alma mater where she was honored for her silver-medal performance in the pole vault at the Olympics in Beijing.

“I’ve never seen this type of support for a hometown Olympian,” said Rick Suhr, Jenn’s coach, who would later become her husband, that late September day in 2008. “This is incredible.”

Well, one can only imagine what kind of reception the Village of Fredonia has in store now.

Just eight years after being introduced to the sport, Jenn sits atop the pole-vaulting world after claiming the gold medal on Monday in London. The 2000 Fredonia Central School graduate and 2009 Chautauqua Sports Hall of Fame inductee vaulted 15 feet, 7 inches (4.75 meters) to defeat Cuba’s Yarisley Silva, who cleared the same height but lost on a tiebreaker because she had one more miss in the competition. 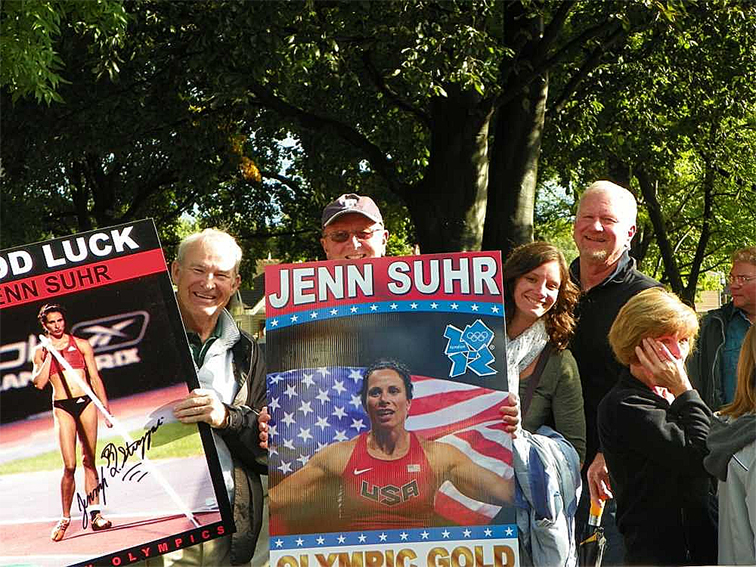 Photo courtesy of the Chautauqua Sports Hall of Fame In this September 2012 file photo, supporters of Jenn Suhr turn out in Fredonia six weeks after she claimed a gold medal.

“To be peaking and be perfect at a perfect event like the Olympics is the most incredible thing that has happened to an athlete from our county,” he said. “It’s incredible and it’s inspiring.”

Swanson, who is a 2003 CSHOF inductee, knows the hard work it takes, having qualified for the Olympic Trials in 2000 and compiling one of the finest running resumes in the history of the Atlantic Coast Conference.

“(Jenn’s gold-medal performance) gives you goose bumps,” he said. “… To have that happen on the right day is what it’s all about, and she did it.”

Several others chimed in with their thoughts on Jenn’s gold-medal day, including CSHOF inductee Stan Marshaus, who emailed president Randy Anderson last night with the following:

“Jenn was a student of mine in golf at Chautauqua (Golf Club),” wrote Marshaus, who, before his retirement, was the club’s director of golf. “This was when she was still at Roberts Wesleyan. She was an unbelievable athlete. I believe that she would be on the LPGA Tour if she had put forth the same effort in golf. I’m happy for her and proud to know her.”

Anderson couldn’t hide his glee either.

“This has to be one of the greatest sporting achievements in the history of Chautauqua County,” he said. “We’ve honored terrific athletes for winning league titles, sectional titles and All-American status, but this lady is the best in the world.

When she was at Fredonia High, she played softball, basketball, soccer and track and field. In the latter, she won the New York State Public High School Athletic Association pentathlon title in 2000, which was her senior year. She continued her track and field career at Roberts Wesleyan College in Rochester where she also played basketball. As a senior on the hardwood, she averaged 24.3 points and 6.7 rebounds per game, leading the Raiders to the NCCAA national championship game. By the time she graduated, Jenn was the school’s all-time leading scorer.

Her basketball prowess was of no surprise to John Bongiovanni, who was Fredonia’s girls jayvee coach for one season in the late 1990s. In fact, he remembers one play she made in practice that still has him shaking his head.

“Jenn was at the foul line extended,” Bongiovanni recalled, “and she faked right, dribbled to her left, took two steps and laid it in. It was effortless. I’ve never seen anything like it, boys or girls.”

As an undergraduate, Bongiovanni said, she often deferred to teammates.

“The more we threatened her, the more she’d score at will,” Bongiovanni said. “I wonder if we still have film on her?”

Jenn’s supporters won’t have to look far to re-live her golden Olympic moment on video — you think her family and friends in Fredonia won’t be wearing out YouTube? — nor will they have to debate her place among Chautauqua County’s all-time athletes.

“As far as individual sport, I honestly can’t think of anyone who has achieved anything greater,” Anderson said. “Mount Rushmore? Maybe they are going to have to build a separate mountain for her.”