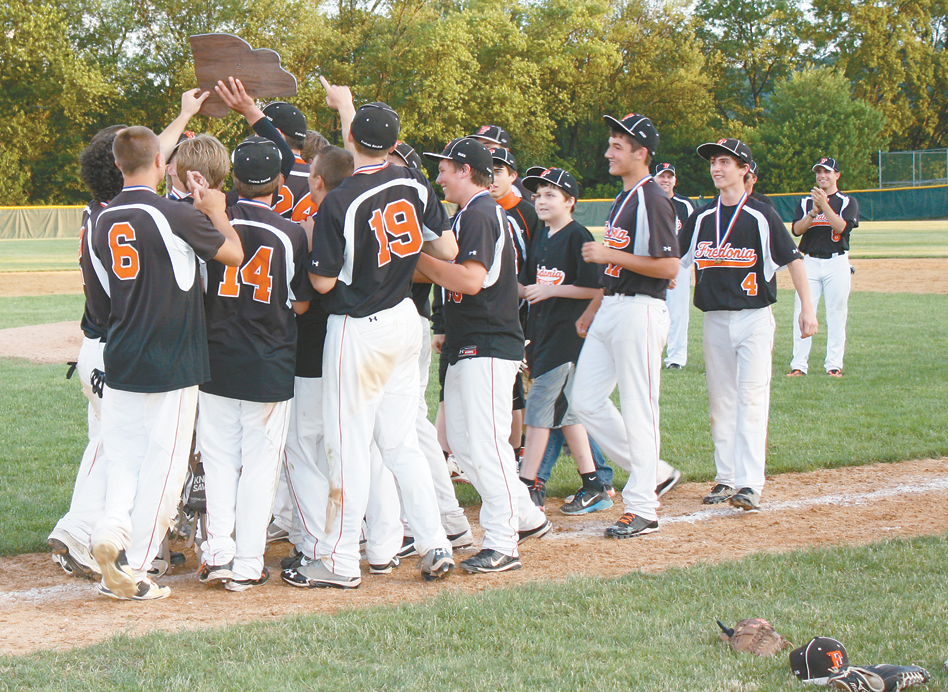 EDITOR’S NOTE: In another edition of the “Remember When” series, the 2013 state champion Fredonia baseball team is featured. Throughout this week, the OBSERVER ran the Hillbillies’ final four playoff victories. Today, we conclude with the Class B state semifinals and championship game.

“I wanted to get to the state finals to be honest,” Fredonia coach Vince Gullo said. “I was trying to be somewhat realistic, but these kids wanted a state championship. One of my assistant coaches, Charlie LaDuca from Pine Valley, won a state title. Bryan Bongiovanni, one of my assistant coaches, won it on our team in (2006), so there’s been a lot of chatter about it. But to go out and actually do it is amazing.”

Senior Trent Thompson helped pitch and hit the Hillbillies past Section X’s Ogdensburg Free Academy, 9-2, in the semifinals earlier in the day, but it was sophomore Cameron Voss who stole the show in the finale as he allowed just one hit in a complete-game effort.

“He comes prepared and he’s so loose,” Gullo said. “He doesn’t know what pressure is yet and as much as he wanted to win the title, he’ll be the first to say he’s so glad he won it for the seniors.” 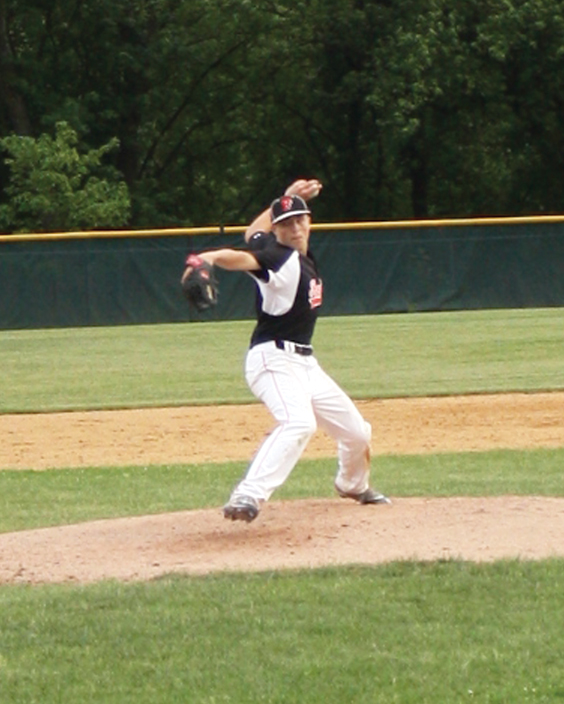 “He’s made me pitch in big games before,” Voss said of Gullo. “I was nervous at the start, but as I got into the second and third innings, I felt really good.”

Voss allowed just a leadoff single to Andrew Hayduk in the bottom of the seventh inning as he finished striking out four and walking five in the biggest game of his high school career.

“He had all the answers,” Clinton coach Tom Pfisterer said. “Every time we got ahead in the count, he made the pitch he needed to make, and we did not hit the ball hard off him at all. My hat’s off. I understand he’s just a sophomore and God bless him, he’s going to be a good one.”

The Hillbillies started fast in the championship game as they got to Clinton starter Jon Ford for five runs on six hits and a walk in the top of the first.

Hart led off the game with a walk before Weston Ley, Zach Buckley, Voss and Jude Gardner all singled to help the Hillbillies build a 2-0 lead. An RBI fielder’s choice by Thompson gave Fredonia a 3-0 lead while Sebastian McAfee and Christian Saden each added run-scoring singles for a 5-0 cushion.

“Putting up five in the first was a little bit reminiscent of (2006) when we got on top of Babylon,” Gullo said. “And we came out smoking. Playing two games in a row is definitely an advantage than having to win a game and sit around.

“But their pitcher found his groove. This is high-level baseball and I was proud that we got a run in the sixth and a run in the seventh to pad the lead.”

The five runs in the first proved to be all Voss needed as the Warriors were befuddled by the tall lefty the entire night.

“He’s improving every time he picks up the ball,” Gullo said. “His command, his location, his demeanor, his thought process … he’s a good one.”

“I struggled throwing the same speed at times,” Voss added. “But toward the end, I felt really good. I went out and threw on the side and my arm felt really good going into the last couple innings.”

The Hillbillies added a single run in the sixth on an RBI single by Ley for a 6-0 lead before Thompson added an RBI on a sacrifice fly in the seventh.

“It’s the greatest feeling ever,” Buckley said. “To come out and end the season as state champs, to be the only team to end its season with a win, it’s the best feeling ever.”

For Fredonia, the title is its second in the last eight years and like the 2006 team that beat Babylon on the same field, these Hillbillies were led by their seniors as Hart, Buckley, Gardner, Thompson, McAfee, Saden and Matt Coyle ended their season the best way imaginable.

“It’s the best feeling,” Hart said of the win. “Ending your season with a win, only one team in Class B can say they did that, I mean it’s what we dreamed of.

“Everybody experienced the sadness of last year,” Hart continued. “But this year is the ultimate joy. Ending our senior season like this, I don’t think there is a better feeling.”

Saden, who batted eighth in both games, picked the best time to have his most productive day at the plate as he finished his career with a 3-for-4 effort, including a double and an RBI.

“We knew we had it in him,” Hart said. “It was just a matter of making contact and he did it. He came up huge for us in the biggest game of the year. He’s been a senior leader all year and it’s good to see the hard work he’s put in pay off for him.”

“That kid is something else,” Gullo added of Saden. “He gets cold batting and he’s all or nothing and (Saturday) he was ‘all.’ How can you pick a better day than (Saturday) to lead your team to victory?”

In the first game, the Hillbillies fell behind early after a pair of errors led to single runs for Ogdensburg Free Academy in the top of the second and third innings.

“That’s just kind of how baseball is,” Thompson noted of the Hillbillies errors in the semifinals. “Sometimes there are just some crazy plays and sometimes people make mistakes, but we picked each other up when someone made an error. I think we did good as a team.”

“He threw a fastball and we’re a fastball-hitting team,” Gullo said of LaRose. “It took us a little while to catch up and I don’t think he had his best stuff either.”

The six runs provided by RBI singles off the bats of Ley, Voss and Thompson, as well as a perfectly executed double steal that chased home Buckley and a sacrifice fly by Coyle, were all Thompson needed as he settled in to lead the Hillbillies into the title game.

“I think I threw the ball pretty good,” Thompson said. “I think I had decent velocity, but I was struggling to find my second pitch at first, but I gutted it out and it came back. Then the bats got going and we pulled it out.”

Fredonia tacked on single runs in the fourth, fifth and sixth innings as it cruised to the 9-2 win.

“Both teams were senior-laden teams,” Gullo said comparing his 2006 team to this one. “They’re ballplayers, good kids, good families, but I also can’t say enough about my coaching staff. To have Greg (Smith) and Bryan (Bongiovanni) and Brent (Thompson) to return from the last couple of years and to add Tim Cowan and Charlie LaDuca, this is an amazing staff. And these guys do their jobs and they’re so thorough and we all bonded. What a great year we had.”

Despite losing a lot of experience to graduation, Gullo is optimistic about what he has coming back, even though he isn’t yet thinking about the 2014 season.

“We’ve got some ball players coming back,” Gullo said. “But give me until July then we’ll worry about next year.”