People’s column: Views on the candidates, issues of Election 2019 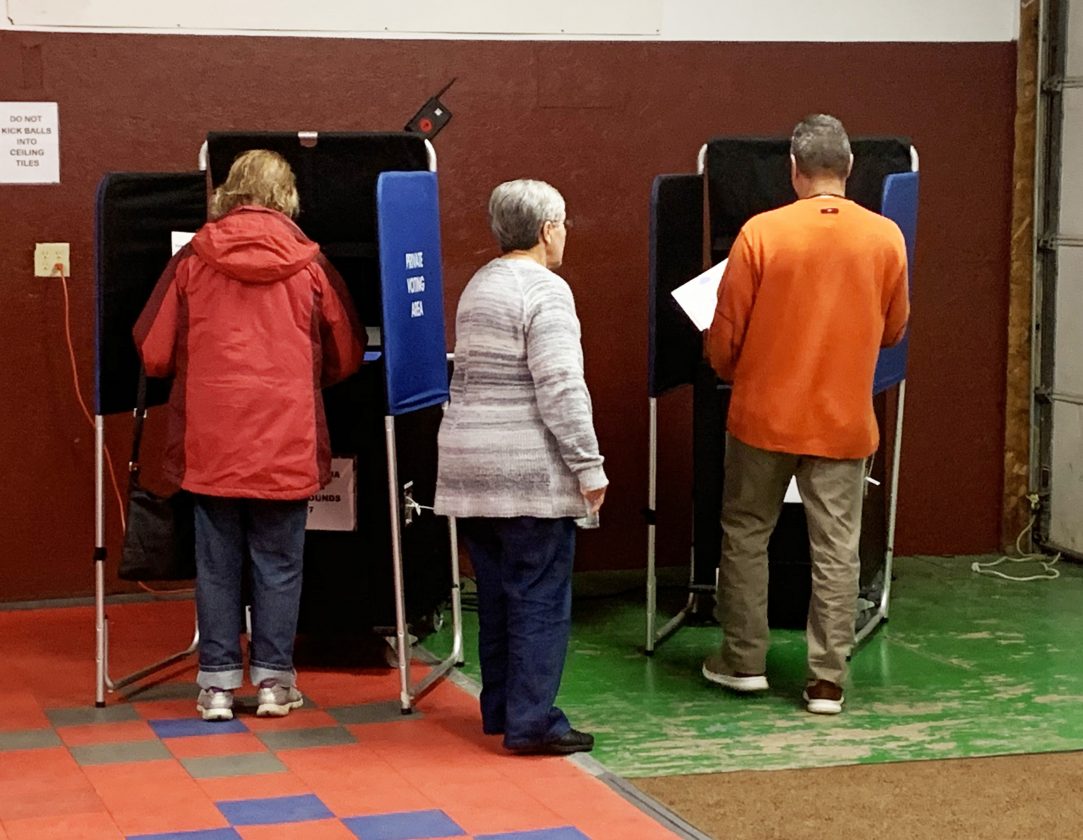 OBSERVER Photo Through Thursday, more than 2,000 had taken part in Early Voting.

The city of Dunkirk’s mayor has proposed a 2020 budget of just over $24 million for 12,000 residents. Yes, we did see an increase over the 2019 budget — but there was no increase in taxes, water rates or sewer fees.

How is this possible? It is possible because Mayor Willie Rosas has worked across the aisle with county, state and federal elected officials and their staffs to bring in revenue to this city so that expenditures for streets, fire halls, police stations, equipment, parks, and the customary costs of doing business can be met.

To make it appear as if the mayor is increasing the budget to add unnecessary expenditures is preposterous. Expenditures must equal revenue — this is a simple concept. A balanced budget is, simply put, a budget in which total revenues are equal to or greater than total expenses. This is not rocket science, folks!

The budget for the city of Dunkirk has increased because the revenue has increased. And, we are better for it — services have been enhanced, repairs to our buildings and infrastructure have been made, our water and wastewater treatment facilities are being upgraded, our beaches and parks have been improved, and all without an increase in taxes, water rates of sewer fees.

We have a mayor who believes in fiscal responsibility and one who works his heart out to bring in revenue to this city and spend it on much needed improvements across the board without increasing our taxes. This is leadership 101, we must keep our city moving forward and that means four more years for Mayor Willie Rosas.

Mayor Rosas has brought vision and fiscal integrity to this office. Please don’t get caught up in the rhetoric coming from those who argue for regression. Yes, the NRG closing is a huge obstacle, but the mayor, his team, and the support of the City Council has moved Dunkirk forward.

His opponent is running by his own words, that he would like the city to plan for the eventual lack of support from the state. He talks about adding to the workforce at the same time he talks about reducing services.

He complains about lack of services and then at the same time want to decrease revenues.

I submit the challenger’s plan, is no plan at all. As chair of the Economic Development Committee he has done absolutely nothing. He did not even attend one of the public comprehensive plan meetings. The city simply moved forward without him.

We have a clear choice to make. My choice is to vote for another four years of Mayor Rosas.

Fredonia residents, ask yourself this question: Is Fredonia better off than it was four years ago?

I think the answer to that question is a resounding “Yes!” Fredonia residents have seen no tax increases over the last four years. Yet, our infrastructure and other village concerns have been or are in the process of being improved.

As a few examples:

¯ A section of our village had brown water for over a decade. Mayor Athanasia Landis, with support from the majority on the Village Board, successfully applied for and received a grant that paid to fixed that problem. I am sure the residents of the Cottage Street area think they are better off.

¯ Mayor Landis spearheaded $6.4 million in improvements to the village water and wastewater facilities, ensuring better water and waste treatment for all residents. This makes us all better off.

¯ The mayor and board majority reorganized village government, resulting in greater efficiencies, accountability, and lower administrative costs. Again, this benefits all of us in the village!

¯ The village leadership is partnering with the private sector to develop a new economic development plan to enhance our tax base, and is actively promoting the restoration and re-opening of the White Inn, a treasured asset in our community. All of Fredonia will benefit from these actions.

¯ Plans are in place to improve downtown Fredonia and the Opera House due to the mayor and her team securing more than $2.5 million in grant funding. I think we can all agree that a vital downtown district is a platform for Fredonia’s success.

¯ With all these improvements has come greater transparency — the village now streams all Village Board meetings live so our residents can watch the board and mayor in action on more than just cable TV, and they have publicized monthly office hours to allow residents a forum to speak directly with our elected officials outside of the board meeting and casual conversations.

Mayor Landis has proven that she works well with other local government officials in Dunkirk, the county and state. She will continue to work with them, as well as our new town Supervisor Dan Pacos, to make the entire community a better place to live.

I have been impressed with the dedication Mayor Landis and her running mates have demonstrated to benefit our community and the people of Fredonia. They have sacrificed much time and effort to work for us.

Yes, we are better off, and, with Mayor Landis and Trustees Kara Christina, James Lynden and Roger Pacos, we will continue this trajectory. I strongly urge Fredonia residents to vote for this team and support their vision for an even better Fredonia.

It’s about time that Dunkirk has a chance to boast and having the only splash pad in the entire county is something that is worth boasting about.

Our parks are more than just grass and ball fields. Look at Point Gratiot with its new pavilions, more picnic tables, bathrooms that are updated and music in the park.

Wright Park not only has picnic areas but a refurbished basketball court and a splash pad for our children. And let’s not forget the pickle ball court — another first for Dunkirk. These upgrades to our parks would not have happened without the relationships that Mayor Rosas nurtured with state and county officials.

Through his work with other elected leaders and businesses in the area, he was able to get grant money and private sponsorships to fund these upgrades to our parks with no added taxes or costs to our taxpayers. We need to keep this mayor in office for another four years.

As my name was mentioned in your endorsement for District Four Chautauqua County legislator (Oct. 29), I want to make it perfectly clear that I strongly endorse Christine Starks for re-election.

Starks has quietly dedicated countless volunteer hours to Festival’s Fredonia, she is vice president of the SUNY Fredonia Alumni Board, and when needed, is always available to work with other community organizations.

The reason I strongly endorse Christine Starks is that she is intelligent, she researches every issue and votes appropriately, and she has excellent social skills. She is able to work well with legislators of all parties and she represents her constituents with an open mind and the willingness to listen.

All of Christine’s positive attributes make her the best candidate for District Four legislator.

The Voters of the town of Hanover have some big shoes to fill on Tuesday with the retirement of long serving town Clerk Janine Salzman. The residents benefitted greatly from a clerk’s office that ran like a Swiss watch for more than 40 years.

I would like to take this opportunity to ask the voters of Hanover to vote for the most qualified candidate to replace her. Endorsed by the Republican and Conservative Parties, Tim Crino is that candidate.

Crino grew up in Silver Creek and graduated from Silver Creek Central. Four years later he graduated from St. Bonaventure with a degree in accounting. He went to work for his father’s accounting firm until his calling to public service led him to the FBI Academy and a long, distinguished, career in federal law enforcement. A career that took him around the country and around the world investigating white collar crime and later becoming a supervisory agent in the evidence response snit. Retirement from the FBI led to his current position as director of audit with the New York State Inspector General’s office. Crino and his wife, Wendy, reside in Sunset Bay.

In a recent “Meet the Candidates” forum Crino’s opponent conceded that Tim was more qualified for the position. I concur.

Qualifications matter! Crino’s skill sets, supervisory experience, and proven ability to work well with others, make him a perfect fit to take over for the long tenured Janine Salzman. His desire to serve has not wavered with the years.

On Tuesday, the residents of the town of Hanover can become the collective beneficiaries of one man’s lifelong commitment to public service.

I don’t know what it was like before when it came to balancing the city’s budget, but I have been paying attention and to find out that the city’s budget has been balanced every year, even with NRG pulling out, says a lot for the current administration.

All of the city’s union contracts were settled, new equipment has been purchased to include a fire truck, street paver, and other things. Upgrades to all of the city’s facilities, our parks are beautiful.

Our beaches are excellent, our streets are coming along, and all of this has happened because Mayor Wilfred Rosas has worked to bring in grant funding that has made it happen.

Nothing easy in today’s world

“We should not look back unless it is to derive useful lessons from past errors, and for the purpose of profiting ...

Racism column was ‘misleading’ Editor, OBSERVER: I am responding to a column written by Stephen Kershnar on ...

Westfield engaged with its school Editor, OBSERVER: I am writing in regard to the Westfield Academy and Central ...

Without a ‘D,’ Goodell has critics Editor, OBSERVER: This is in response to “Goodell missed chance at ...

Without a ‘D,’ Goodell has critics

Editor, OBSERVER: This is in response to “Goodell missed chance at rally” (June 13) in which the author ...